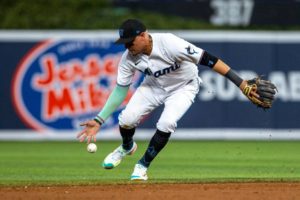 The professional handicappers at Oskeim Sports have the winning information you need before betting on Wednesday’s MLB games.  Oskeim’s MLB Betting Market Report gives you the winning edge.

Analysis: Since 2020, Cleveland starter Shane Bieber is 13-0 straight-up and 10-3 (+58.0% ROI) against the run line as a favorite following an outing in which he lasted at least seven innings. Since May 2, 2018, the Guardians are 16-1 straight-up on Wednesdays in non-divisional games with a line shorter than -130. This situation is 7-1 against the run line if the line is shorter than -170. Finally, Cleveland applies to very good 521-162 and 406-130 systems of mine that have both been profitable against the run line since 2017. Take the Guardians and invest with confidence.

Since September 20, 2020, Miami starter Sandy Alcantara is 7-0 straight-up and 6-1 (+61.2% ROI) against the run line if it is not a doubleheader and he worked no more than five innings in his previous outing. Finally, Miami applies to very good 406-130, 108-41 and 55-11 situations that have all produced a profit against the run line.  Take the Marlins and invest with confidence.