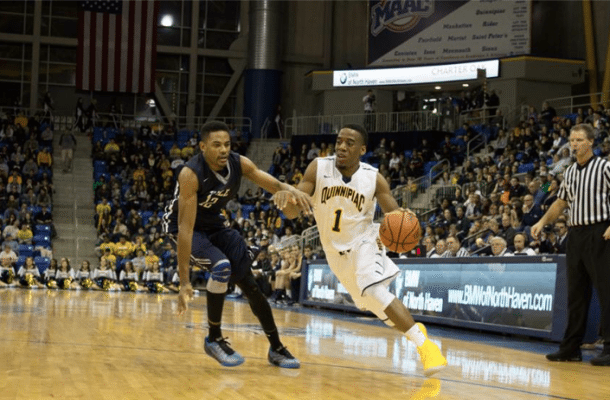 Quinnipiac head coach Tom Moore is doing a terrific job in Hamden as the Bobcats have compiled three 20-win seasons in five years and four postseason appearances in six years. As the 2014-2015 basketball campaign commences, the Bobcats have their eyes set on the NCAA Tournament, and I believe Moore has the talent and depth to make that dream become a reality.  Quinnipiac is our free sports pick for Tuesday; please see below for detailed analysis.

Quinnipiac’s frontcourt is led by senior Ousmane Drame, who shot a team-high 49.2% from the field last season and is regarded as one of the best players in the Metro Atlantic Athletic Conference. The 6-9 forward led the conference in rebounding and finished 8th nationally, while also garnering fifteen double-doubles last year. The Bobcats’ success has always been predicated upon controlling the boards as they led the nation last season in rebounding margin (+11.8), rebounds per game (45.4), offensive rebounds per game (16.7) and defensive rebounds per game (28.7).

The Bobcats also enter the season with a solid backcourt anchored by senior Zaid Hearst who, like Drame, is widely regarded as one of the Conference’s best players. Hearst scored ten or more points in 25 of 32 games last season, while scoring 20 or more points in eleven games. The 6-4 guard led the team in three-point field goal percentage (.410) and finished second in scoring with 15.5 points per game. Hearst is known for his work ethic as he seems to spend every waking hour on the court improving his game.

That work ethic convinced coach Moore to choose a team captain for the first time in seven years. The recipient, of course, was Hearst. Quinnipiac’s depth is enhanced by the return of senior Evan Conti and sophomore Kasim Chandler, who have both worked tirelessly during the offseason to become even better players. Big things are also expected of freshman Chaise Daniels, who led Putnam Science Academy to a 29-5 record and into the semifinals of the National Prep School Championships.

While the Bobcats have their eyes set on a postseason berth, La Salle looks to be a middle-of-the-road contender in the Atlantic 10 Conference this season. The Explorers have lost three key components to their Sweet 16 runs a couple of years back: Tyreek Duren, Tyrone Garland and Sam Mills. With those departures, La Salle’s backcourt is a major concern as only D.J. Peterson returns with any starting experience.

The backcourt welcomes two transfers from both Auburn and Georgia Southern, but team chemistry will be a significant issue for the Explorers during the first stanza of the season.  Lay the small number with the Bobcats as our free sports pick and invest with confidence.