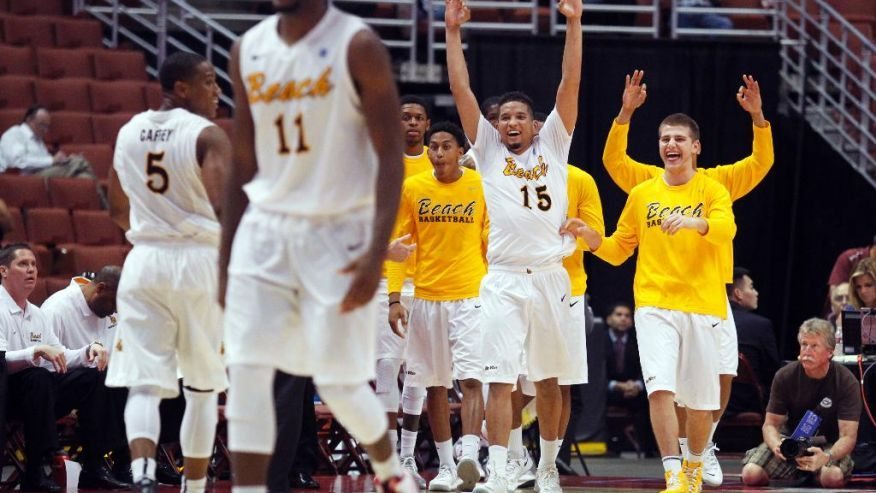 The good news for Long Beach State investors is the fact that both Caffey and Lamb are off to excellent starts in 2014 as Caffey is averaging 19.7 points per game (57.9% FG) while Lamb is averaging 17.0 points per game (50.0% FG). Head coach Dan Monson indicated before the season started that Caffey had a strong summer, and that assertion is supported by the senior’s results through the first three games. “He’s shooting the ball better and he’s stronger.”

Coach Monson has once again done a terrific job in recruiting by bringing in several dynamic freshman who are prepared to make an immediate impact on the program, including Jack Williams, Justin Bibbins, Deontae North and Temidayo Yussef. “This new group is trying to make us relevant again in the league,” Monson said. All four freshmen played for California state championships last season and know what is needed to achieve success at the highest level. “These freshmen are players,” Monson said.

Both North and Williams have not disappointed through the first three games of the season as North is averaging 7.7 points in 24:40 minutes per game, while Williams is averaging 7.3 points and 4.0 rebounds in 23:00 minutes per game. Perhaps the biggest news out of Long Beach was the arrival of senior transfer Eric McKnight, who set a team record by shooting 66.3 percent from the field for Florida Gulf Coast last season. If you recall, Florida Gulf Coast reached the Sweet 16 of the NCAA Tournament in 2013, and McKnight played a large part in that success.

“He played at an elite level and should come in and not only fill a hole but add to it,” Monson said. “The thing this team was missing more than size was athleticism inside. He gives us a very good athlete in the middle and can help protect the rim on the defensive end.” Long Beach State’s offense has looked very good in its first three games as the 49ers are averaging 79.3 points per game on 54.2% shooting from the field and 51.8% from beyond the arc against teams that would combine to allow just 67.7 points per game to a mediocre offensive squad.

And, despite having one of the most difficult non-conference schedules in the nation, the 49ers have averaged over 20 wins per season over the last four years. From a technical standpoint, Kansas State is a money-burning 1-6 ATS in its last seven road games and 4-15 ATS as a road favorite of three points or less, whereas the 49ers are a profitable 5-2 ATS in their last seven games off a blowout loss. Grab the points and invest with confidence.