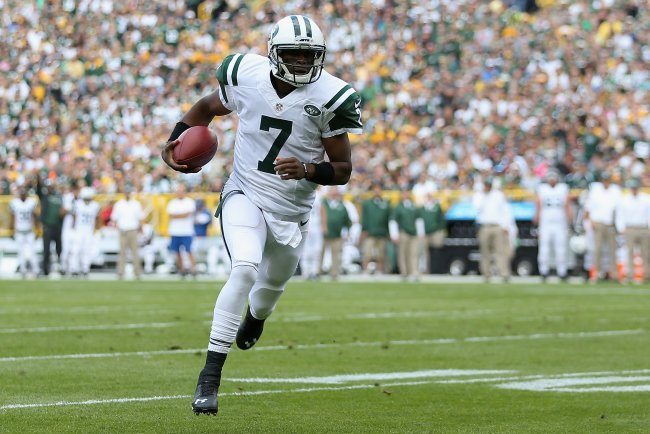 This is a great matchup for the Jets as they possess the league’s #1 rushing attack and get to face a Chicago squad that owns the NFL’s worst rushing defense. That fundamental matchup is significant in that I have a very good 143-37-3 ATS statistical profile indicator that invests on certain home favorites (or underdogs) that possess a strong ground game versus opponents that own a below-average run defense. The situational analysis also strongly favors the Jets as Chicago played a west coast game last Sunday night, traveled back to Chicago before flying to the east coast for tonight’s non-conference affair. I should also note that the Bears host a huge divisional game against Green Bay next week so I would not be surprised to see Chicago peaking ahead to next Sunday’s affair.

While Chicago scored 21 unanswered points to walk away with an improbable 28-20 win at San Francisco last week, the Bears were actually outgained 218 yards at 4.4 yards per play to 361 yards at 5.6 yards per play. Chicago was also the beneficiary of an incredible +4 turnover differential in San Francisco, which is the product of variance more than anything else. The Bears also lost five defensive starters in that game, including All-Pro cornerback Charles Tillman, who is out for the season with a torn biceps muscle. Defensive tackle Jeremiah, safety Chris Conte and cornerback Sherrick McManis are all listed as questionable for tonight’s game. Needless to say, I expect New York to utilize running backs Chris Johnson and Chris Ivory early and often tonight, which will also serve to keep the ball out of the hands of Jay Cutler, who is 6-1 on Monday Night Football.

Technically speaking, New York is a perfect 6-0 ATS in its last six home games following a loss when matched up against an opponent off a SU and ATS win, while quarterback Geno Smith is 7-2 at MetLife Stadium since assuming the starting role. In contrast, Chicago is 1-7 ATS in its last eight games after covering the point spread, and the Bears apply to a very negative 13-59-2 ATS road letdown situation of mine that is predicated upon their come-from-behind upset win at San Francisco last week.

Let’s also note that Chicago is a money-burning 4-13 ATS in competitively-priced games (+3 to -3) and 9-37 ATS when allowing 175 or more rushing yards, whereas the Jets are 34-8 ATS when eclipsing 175 rushing yards. Here a few additional technical gems: New York head coach Rex Ryan is 9-1 SU and ATS as a favorite versus an opponent off an upset win, while the Bears are 3-16 ATS in road games with a total of 45 points or more and 2-8 SU and 1-9 ATS on the road versus an opponent with triple revenge.

Finally, Pinnacle Sports, known as the originator of lines and the home of the sharpest money, initially opened the Jets as one-point favorites before taking a large amount of money from professional bettors. Based on the early sharp money on this game, Pinnacle and other books moved New York to 2 1/2-point favorites earlier in the week. I completely agree with the original move favoring New York – take the Jets and invest with confidence.