Missouri State: Contender or Pretender in the Missouri Valley Conference? 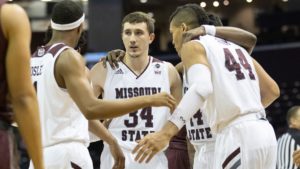 Despite losing to Loyola-Chicago on Sunday, Missouri State is a legitimate contender in the Missouri Valley Conference.  The Bears are 21-10 in its last 31 Missouri Valley games, matching the team’s third-best 31-game stretch since joining the conference in 1990-91. Missouri State is a profitable 37-15-1 ATS in their last 53 games following a win and 23-10-1 ATS in their last 34 games off an against-the-spread (ATS) win.

Prior to Sunday’s loss to the Ramblers, Missouri State was averaging 78.1 points per game on 48.6% shooting from the field and 38.8% from three-point territory against teams that would combine to allow just 71.6 points per game to a mediocre offense. The Bears rank 38th in the country in scoring, 13th in field goal percentage, 12th in three-point field goal percentage and 8th in free throw percentage (.789).  Missouri State is converting 78.3% of its free throws in conference play.

Missouri State ranks 14th nationally in total three-pointers this season (216) and is the only team in Division I with three players boasting 50 or more 3-pointers. Junior guard Ja’Monta Black has made at least one 3-pointer in sixteen consecutive games and ranks 41st nationally with 61 triples this season. KenPom ranks the Bears 18th in effective FG percentage (.553), 26th in adjusted offensive efficiency (112.9) and 35th in 2-point FG percentage (.547). Missouri State also ranks 24th in the nation in turnovers per game (10.6).

Missouri State is led by junior guard Isiaih Mosley, who leads the conference and ranks 10th in the nation in scoring (21.0 ppg). Mosley is shooting 53.0% from the field and 44.9% from beyond the arc at home this season and is joined in the starting lineup by senior forward Gaige Prim, who has scored in double figures in eight straight games and is averaging 15.1 points per game in that span. Prim’s eight double-doubles and .579 FG percentage both lead the conference and rank 23rd nationally.

The star forward also ranks 2nd in the Missouri Valley in total rebounds (188) and rebounds per game (7.8).  Senior transfer Jaylen Minnett (IUPUI) has paid immediate dividends, contributing 8.8 points and 1.2 assists across 19.9 minutes per game. In 132 Division I games, Minnett has 1,597 points, 278 assists and 337 3-pointers, which ranks 6th among all active Division I Players.

Fourth-year head coach Dana Ford is 40-16 (.714) at JQH Arena and was named to ESPN’s College Basketball 40 Under 40 list last season. The 37-year-old was also on the list of national finalists for both the Skip Prosser Award and Ben Jobe Award. Ford is credited for engineering one of the biggest turnarounds in NCAA history, swaying Tennessee State from a 5-26 record in his first season to a 20-11 mark in 2015-16.