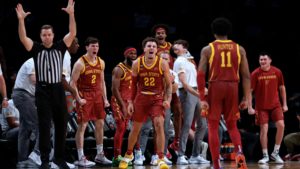 Iowa State is one of the biggest surprises in college basketball this season. The Cyclones returned just 13.3% of its scoring, 25.6% of its rebounding and 24% of minutes played from last year’s squad.  This season marked the first time since the 1997-98 season that the Cyclones officially returned no starters.

Despite the lack of returning production together with an entirely new coaching staff, Iowa State started the 2021-22 campaign 12-0, the second-best start to a season in school history.  The Cyclones are the only Big 12 Conference team that did not drop a non-conference game in the regular season.

A renewed dedication to defense is responsible for Iowa State’s fast start.  First-year head coach T.J. Otzelberger has emphasized ball pressure and rebounding, and the results have been nothing short of spectacular.  Iowa State is one of just six schools nationally with at least six Quad 1 victories and is allowing just 60.5 points per game on 41.2 percent shooting from the field and 27.2 percent behind the arc.

Iowa State has held 12 of 21 opponents to 60 points or less, and only five opponents have shot better than 44 percent from the field this season.  Since the beginning of the 2020-21 season, Iowa State is an incredible 10-2 ATS versus opponents with a win percentage between .600 and .800.  One of the best situations to back the Cyclones is in the underdog role.  Iowa State is 9-2-1 ATS in its last twelve games as an underdog, including a perfect 4-0 ATS at home (through 1/31/22).

Of the 9 scholarship players on Iowa State’s active roster that played last season, eight are shooting better from the field than they did a year ago.  The coaching staff has done a tremendous job turning Iowa State into a legitimate contender in such a short period of time.