A Performance for the Ages: How Isaiah Thomas Became the Face of a Franchise 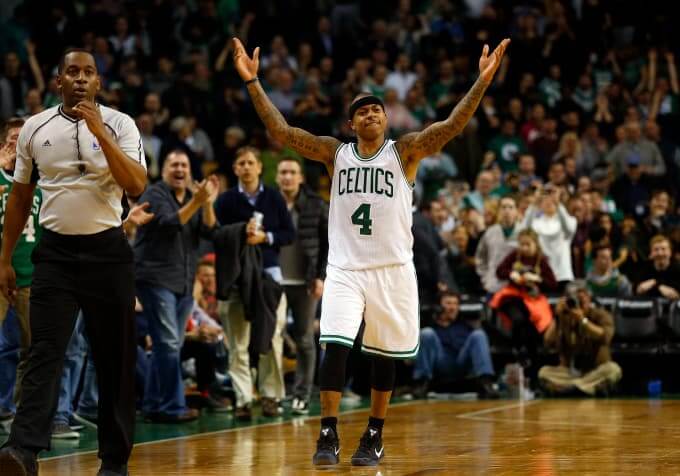 As I have stated on multiple occasions during the 2017 NBA postseason, the Celtics’ regular-season point differential of plus-2.7 made them one of the most overrated No. 1 seeds in league history.

However, that statistic fails to measure the heart and determination of Boston point guard Isaiah Thomas, who scored 53 points in the Celtics’ 129-119 overtime win on Tuesday.  It was the most points scored in an NBA playoff game since Allen Iverson scored 55 in 2003, and just one shy of John Havlicek’s franchise postseason record of 54 points.

Thomas became the second player in NBA history standing 6 feet or shorter to score 50 points in a playoff game (Allen Iverson is the other).  His postseason performance to date is even more impressive in light of the fact that both Chicago and Washington have focused almost entirely on neutralizing Thomas.

Boston acquired Isaiah Thomas from the Phoenix Suns for Marcus Thornton and what would become the 28th pick in the 2016 draft.  It would be Thomas’ third NBA team in less than a year due to the fact that general managers could not get over his lack of height (5-foot-9).

Thomas’ recent outburst can be credited to head coach Brad Stevens, who modified the Celtics’ starting rotation by sitting Amir Johnson and giving more minutes to Al Horford as the team’s lone post player on the court.  Horford spaces the floor more and allows Thomas to become even more efficient in scoring off handoffs.

According to Synergy Sports, Thomas has scored on 56% of his handoffs this postseason, a noticeable increase from his regular-season average of 47%.  Defenders are left to guess on how best to guard Thomas when he receives a handoff because the All-Star has multiple scoring options – drive to the rim, grab and shoot from the perimeter where Thomas is converting 48.7% of his mid-range field goal attempts, etc.

The challenges Isaiah Thomas has faced and overcome – from being the last player selected in the 2011 NBA draft, to being traded twice, to working his way into the starting rotation, and now leading the Celtics as the face of the franchise – is truly remarkable.

Boston acquired Thomas from the Phoenix Suns for Marcus Thornton and what would become the 28th pick in the 2016 draft.  It would be Thomas’ third NBA team in less than a year due to the fact that general managers could not get over his lack of height (5-foot-9).

Thomas attended his sister’s funeral in Washington on Saturday and completed the 6,000-mile round trip just hours before Game 1 to lead Boston to a 123-11 victory. Thomas lost a tooth in that game and underwent six hours of dental work on Tuesday before returning to the hospital on Wednesday morning for an additional 3-4 hours of work to get the swelling down.

His strength and perseverance in this series have been nothing short of extraordinary.  Isaiah Thomas has rightfully become the face of the Boston Celtics’ franchise.