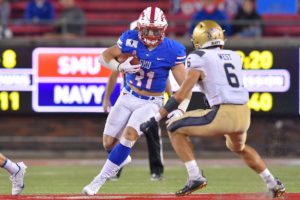 Despite losing to Tulsa last week, Navy still has a chance to save its season. Navy beat Tulsa 53-21 last week in its best offensive effort of the season. The Midshipmen improved to 2-3 overall and 2-1 in the American Athletic Conference with the victory. SMU is 2-3 overall after having started the 2022 season with two straight wins. The Mustangs are 0-1 in AAC play with a loss to UCF o Oct. 5.

It’s likely that the Mustangs will struggle to stop the Navy triple-option offense. Navy has averaged 42.7 points per game against SMU over the last seven head-to-head contests. However, all three of SMU’s wins over Navy in the previous ten meetings have occurred in the past four years.

In his spectacular performance against Tulsa, Navy’s senior fullback Daba Fofana rushed for a career-high 159 yards and three touchdowns, all of which came in the second quarter. The Navy offense starts with the fullback. Teams looking to beat the Midshipmen must stop the fullback first. Historically, SMU has had trouble doing so.

Vincent Terrell Jr. rushed for 93 yards and a touchdown on 17 attempts in the victory over Tulsa. Nathan Kent added a 70-yard reverse running touchdown, and Kai Puailoa-Rojas’ trick play saw QB Tai Lavatai catch a pass for a 26-yard touchdown.

Navy got off to a rough start this season losing to FCS Delaware at home.  Navy then missed its chance to take home the Commander-in-Chief Trophy after a loss to Air Force on October 1. The Midshipmen are still very much in the race for the AAC after their victory over Tulsa, though.

As mentioned, SMU hasn’t played in nine days. The Mustangs would have had an even bigger rest if the game with UCF had been played as originally scheduled. The game was set for Oct. 1, but Hurricane Ian forced a schedule change. SMU even led that game 13-10 at the half, but the Mustangs gave up 31 unanswered points in the second half. SMU quarterback Tanner Mordecai completed 28 of his 45 passes for 295 yards while throwing one interception.

SMU leads the AAC in total offense (500.2 yards per game) and has the third-best scoring offense in the league (34.6 points per game). SMU has won three of its last four games versus Navy, including the previous two. However, Navy continues to lead the overall series 13-10. The Midshipmen have won 12 of the past 16 meetings with the Mustangs.

In their previous eight games, the Midshipmen are 6-2 ATS, and in their last nine meetings with SMU, they are 7-2 ATS. SMU is 1-6 ATS in its last seven games overall and 1-5 ATS in its last six games in AAC play.