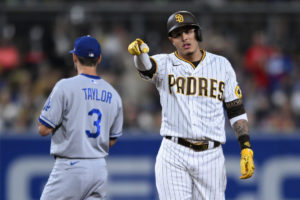 Last year, San Diego Padres players guaranteed a home playoff game to its fans. They are going to get it.

With a 5-3 victory over the visiting Los Angeles Dodgers on Wednesday, the Padres tied the best-of-five National League Division Series at one game each. As a result, they are now guaranteed to host not just one but two playoff games at home.

Meanwhile, Snell needs to get back into the shape he was in toward the end of the regular season. After the All-Star break, he made 14 starts and recorded a 2.19 ERA with 105 strikeouts in 78 innings pitched. But in the Padres’ lone defeat to the New York Mets in the wild-card round, Snell gave up two runs on four hits and six walks in just 3 1/3 innings.

Roberts decided to go with Gonsolin tonight instead of Tyler Anderson because the entire Dodgers bullpen will be available after having had Thursday off. Gonsolin may have some limitations as far as how deep he can go in tonight’s games. Anderson will start on Saturday night.

Padres manager Bob Melvin expects Snell to rebound from his start against the Mets. In 15 home starts this season, Snell has a 3.56 ERA and 108 strikeouts in 81 innings. His record versus the Dodgers was 0-1 in three starts, with a 3.86 ERA, 1.57 WHIP, and 23 strikeouts in 14 innings. He also walked 10, which could be an issue. Snell started two games for Tampa Bay against the Dodgers in the 2020 World Series and limited them to three runs on four hits and four walks while recording 18 strikeouts in 10 innings.

The Dodgers went 14-5 SU against the Padres during the regular season. In the last five head-to-head matchups played in San Diego, Los Angeles is 4-1. The Over is 7-1 in San Diego’s last eight games and 7-3 in its last 10 against the Dodgers.