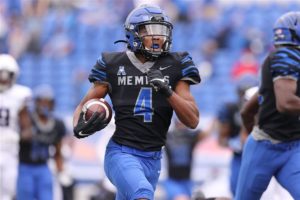 In an American Athletic Conference matchup, struggling Houston will travel to Memphis on Friday in an effort to snap the Tigers’ current four-game winning streak. With a win on Friday, the Tigers (4-1, 2-0 AAC) can keep a commanding lead in the conference standings and all but rule out Houston’s chances of making a comeback to the league title game.

Last Saturday, Memphis trounced Temple 24-3 at home. Despite a poor first half in which they were held without a point. It was the first time since 2017 that the Tigers were shut out in a half. Memphis head coach Ryan Silverfield is aware that the Tigers must adapt and play better when they face a Houston squad that many predicted would challenge for the AAC championship.

Houston suffered a 27-24 home overtime loss to Tulane last Friday. For the Cougars, it was their third overtime game of the year. They have lost two of them. Houston (2-3, 0-1 AAC) scored 14 straight points in the fourth quarter of the Tulane game before Tulane tied the score with a touchdown with 39 seconds remaining. The Cougars took the ball first in overtime and kicked a field goal, but Tulane responded with a game-winning touchdown pass.

Two of the best quarterbacks in the conference will go at it tonight. With 208 yards and two touchdowns in the losing effort last week, quarterback Clayton Tune became only the fourth player in Houston history to accumulate 10,000 career total yards. Memphis is led by quarterback Seth Henigan, who has completed 63.3 percent of his throws for 1,276 yards and nine touchdowns. The Tigers have scored 37 points per game so far this season.

Houston can’t afford to lose again, especially in a conference game. Close games have been difficult for the Cougars. They did win their season opener over UTSA in overtime, but they did lose the other two overtime games. Plus, they trailed Rice late in the fourth quarter before winning 34-27.

In Memphis’ last six games, the Over has a 5-1 record. In Houston’s last five contests and the Cougars’ last nine away games, the Over is 8-1. In four of the previous five games between the Cougars and Tigers, the total has gone Over.

The home team has won the last two meetings in the series. Houston won last year at home 31-13, covering as a 9.5-point favorite. Despite their recent woes, the Cougars have gone 14-4 SU in their last 18 games. They have also won eight of their last ten games in AAC play.