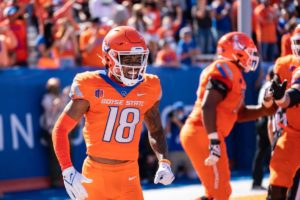 It’s a Mountain West clash between the Boise State Broncos and the UTEP Miners on Friday night. Boise State’s only loss of the season so far came against Oregon State in Week 1. The Broncos are 2-1 on the season after beating FCS UT-Martin and New Mexico.

The Broncos’ opponent tonight, UTEP, is 1-3 so far this season. The Miners’ lone victory came in Week 2 against New Mexico State. UTEP has lost to Oklahoma, North Texas, and the same New Mexico team that Boise State has already beaten.

Boise State’s best performance of the season actually came in their loss to Oregon State. The two victories over New Mexico and UT-Martin were expected. The Broncos beat the Lobos 31-14 and followed that up with a 30-7 win last week over UT-Martin.

The common opponent for both teams, of course, was New Mexico. UTEP lost to the Lobos 27-10 just last Saturday. One of the issues for UTEP is the offense. Through four games, the Miners are averaging just 14 points per game. They reached 20 points just once and that was in the team’s 20-13 win over New Mexico State.

UTEP is definitely not an offensive machine. Boise State isn’t either. The Broncos average 26 points per game but remember they scored 30 on an FCS team. QB Hank Bachmaier and RB George Holani have been around a few years for Boise and will lead the Broncos’ offense. The UTEP defense is giving up 372 yards of offense per game.

Under second-year head coach Andy Avalos, Boise State has turned into a very good defensive team. Last season, the Broncos finished 12th in scoring defense allowing opponents just 19.0 points per game. Boise State was a top-50 defense against the pass and in total defense. So far this season, the Broncos have allowed an average of 248.3 yards per game. That will make it extremely difficult for an offense like UTEP’s.

The two teams have only played six times. Remember, Boise has won them all. The Broncos have averaged 48.3 points per game in those six victories over the Miners. When the teams met last year, Boise put up 54 points in a 54-13 victory.