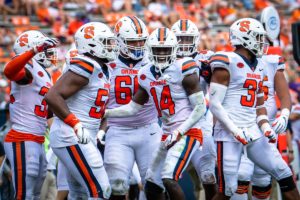 Syracuse finished off a 22-point fourth quarter with the final touchdown pass from Shrader. Shrader’s top target the entire game was Gadsen, who finished with six receptions for 112 yards and two touchdown receptions. Syracuse head coach Dino Babers sees it as another positive step. The Orange have struggled over the past three seasons going 11-24.

Virginia (2-1, 0-0) experienced a thrilling victory of its own. With time running out, kicker Brendan Farrell connected on the game-winning 26-yard field goal to give the Cavaliers a 16-14 victory over Old Dominion. Brennan Armstrong’s 284-yard passing effort led the Cavaliers’ offense. WR Keytaon Thompson had 118 yards receiving and Xavier Brown gained 88 yards on the ground on nine carries. Brown, a freshman running back, has so far this season averaged 7.2 yards per carry.

Tony Elliott, Virginia’s first-year head coach, earned his team’s second victory so far this year. Many experts predicted that the Cavaliers would finish second in the ACC’s Coastal Division, trailing the favorite, Miami. If Virginia is going to have any shot at winning the division, it will most likely revolve around the play of Armstrong, who threw for over 4,400 yards last season.

Sean Tucker, Syracuse star running back, concluded the 2021 season with 1,496 rushing yards and 12 touchdowns. Tucker started the 2022 season well, running for more than 100 yards in each of the first two games despite having a relatively quiet performance in Week 3 with just 42 yards on 18 attempts.

The teams will face off for the sixth time overall in the series. Virginia currently leads the series 3-2. In their most recent meeting, back in 2015, the Cavaliers won at home, 44-38, in a thrilling contest that required three overtimes.

In its previous seven games, Virginia is 2-5 SU and 1-6 ATS. In their previous 13 road games, the Cavaliers have a 2-11 SU record. In their last six encounters with opponents from the Coastal Division, Syracuse has performed poorly, going just 2-4 SU. The Orange are 7-1 ATS in their past eight games at home in the Carrier Dome and 10-3 ATS in their last 13 games overall.

The total has gone Under in five of Virginia’s last six games. The Under is also 5-0 in the Cavaliers’ last five games played in the month of September. The offense has had a rough time so far this season scoring just 19 points in two games against FBS competition. Virginia scored 34 points in its season opener against FCS Richmond. Each of Syracuse’s last two games have gone Over the total.