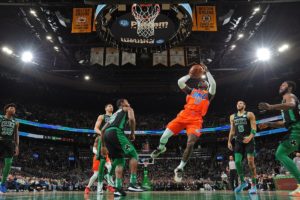 The Boston Celtics’ busy stretch resumes as they host the Oklahoma City Thunder tonight riding a six-game winning streak. Jaylen Brown (knee), Al Horford (back) and Malcolm Brogdon (hamstring) were all out with injuries on Saturday, but Jayson Tatum’s season-high 43 points led the way as the Celtics were 117-108 winners at Detroit.

The Celtics are now 10-3 overall and their depth is incredible. Without Brown, Horford, and Brogdon; it was Tatum that stepped up. He leads the NBA in points with 420 in 13 games, an average of 32.3 per game. During the current six-game winning streak, Tatum has been even better. He’s averaging 34.8 points a game on 47 percent shooting from the floor.

In the win over Detroit on Saturday, Tatum added 10 rebounds, three assists, a steal, and a block to go with his 43 points. His performance thus far is somewhat of a carry-over from last season when Boston made a deep run in the playoffs that resulted in a berth in NBA Finals. Grant Williams scored 19 points for the Celtics on Saturday and Marcus Smart added 18 points and 10 assists.

Oklahoma City ended a four-game losing streak with two straight wins over Toronto and New York. The Thunder beat the Knicks 145-135 on Sunday in New York. The 145 points were just four shy of tying a franchise record. In a 132-113 win over Toronto on Friday night, eight Thunder players scored in double figures, which was a franchise first

He didn’t do it himself either. Josh Giddey has been playing well. On Sunday, he became just the second player in NBA history to record a triple-double in each of his first two games at Madison Square Garden. He had 24 points, 12 assists, and 10 rebounds on Sunday. The other player to do so? Wilt Chamberlain.

While the Celtics did it last year with defense, this season they are the No. 1 scoring team in the NBA. Boston averages 119.5 points per game, led by Tatum, of course. The Celtics are the No. 2 shooting team in the league hitting 48.4 percent from the field and they are third in three-point field goal percentage at 38.9 percent.

The Thunder is the 18th-ranked defense in the league. In their last three games, OKC has given up 135, 113, and 136 points. In the last three head-to-head games, the Celtics and Thunder have averaged a total of 235 points and all three games went Over the game total. Both teams have an 8-5 O/U record this season. The Over is 7-2 in OKC’s last nine games and 5-2 in Boston’s last seven.