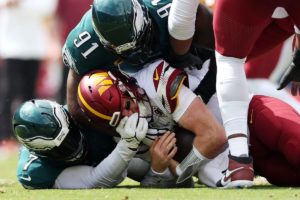 The Philadelphia Eagles (8-0 SU, 5-3 ATS) will play the Washington Commanders (4-5, 4-4-1) on Monday Night Football in Week 10 and try to maintain their best start in franchise history as double-digit home favorites. In Week 2 at FedEx Field, the Eagles easily covered the spread as 5.5-point road favorites, defeating the Commanders 24-8 thanks to nine total sacks.

Washington has been able to stay in games thanks to its defense. Before losing to Minnesota last week, the Commanders had won three straight holding their three opponents to 7, 21, and 16 points. The offense isn’t as solid for Washington scoring 17 points or fewer in six of the team’s previous seven games. Last week, Washington had a lead over the Vikings before falling 20-17. The Commanders’ defense once again kept them in the game allowing just 17 points. That defense hasn’t let up more than 21 points in five straight games. In those five games, Washington has a 3-2 SU and ATS record.

The Washington run defense will be tested after performing well against the Vikings. Minnesota RB Dalvin Cook managed just 47 yards on 17 carries thanks to the Commanders. Vikings QB Kirk Cousins was also sacked three times and had one interception. The Commanders must exert some pressure on Eagles quarterback Jalen Hurts and slow down the Eagles’ running game if they are to have any hope of surprising Philadelphia.

In Week 3, Hurts, who has frequently caused damage with his legs, was limited to 20 yards on nine carries. Given that he hasn’t played since November 3, the Eagles quarterback should have fresh legs. Philadelphia will benefit from the additional time off as it attempts to keep up its 4-0 ATS home record this year. All four of the Eagles’ home victories have been by eight points or more, with an average margin of victory of 14 points.

The Eagles’ running game averages 148.7 yards per game and is sixth in the NFL. Philadelphia will need a strong offensive performance tonight, but don’t forget the Eagles’ defense is ranked third against the pass and fourth in scoring defense.

Washington is just 2-9 in its last 11 games against Philadelphia. In their last five trips to the City of Brotherly Love, the Commanders are 1-4 SU.