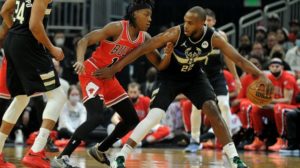 The Chicago Bulls will try to end a three-game losing skid tonight when they host Milwaukee at the United Center tonight. The Bucks lost their first game after the break to Brooklyn but have won two straight. Wednesday night’s win over Miami was a big win and exciting as well. The Bucks trailed by 14 points in the fourth quarter and came back to win. The Bulls are coming off a disappointing loss to Atlanta just last night.

Chicago’s defense has been failing itself as of late. The injuries to Lonzo Ball and Alex Caruso are really taking a toll on the Bulls. Chicago beat Atlanta in its first game after the break but has now lost three straight. In each of the three games, the Bulls have given up at least 112 points. Since the All-Star break, Chicago’s defense is allowing 116.5 points per game. The Bulls are a top ten offense, but they only average 112.5 points per game.

DeMar DeRozan, who is averaging 28.1 points per game, has cooled off since his recent string of 30-plus point games. After 10 straight with 30 or more, DeRozan scored 18 in a loss to the Heat and 22 last night in the loss to Atlanta.

Milwaukee and Giannis Antetokounmpo have been headed in the other direction. The Bucks have been shooting the lights out and the Greek Freak is averaging 31.6 points over his last ten games. After going 1-3 heading into All-Star weekend, Milwaukee is 2-1 after it. In their three games since the break, the Bucks are averaging 124.3 points per game. That could be trouble for a Chicago defense that has been falling apart recently.

Tonight’s total is a big one. The Over is 9-1 in the Bucks last ten games while the total has gone Under in five of the Bulls’ last seven. The Under has also hit in four of the last five Bucks-Bulls games. Adding the two teams’ average scoring totals this season yields 226 points. The last three games in the series have averaged 206.7.