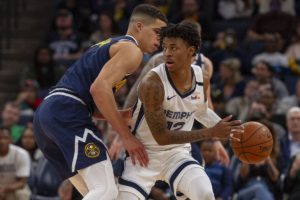 With Golden State having difficulty reaching .500 and the Lakers suffering a huge blow with the loss of Anthony Davis to an injury, the Western Conference champions of the last eight seasons appear ready to be supplanted. Ready to fill the void are two teams – Memphis and Denver – that will meet tonight in the Mile High City.

The Grizzlies lead the West after winning seven straight. Memphis did end that streak on Saturday night. They lost the first game of their current four-game road trip to Oklahoma City. Denver, which has played 12 fewer home games than any other team in the West except Sacramento, is one game behind the Grizzlies in the Western Conference standings.

In the first of three games between the teams on Tuesday, the Grizzlies and Nuggets both bring plenty of firepower. Ja Morant leads the Grizzlies with 26.7 points per game and his supporting cast of Jaren Jackson Jr., Dillon Brooks, and Desmond Bane give the Grizzlies the necessary pieces for an NBA title run. Bane averages 24.7 points a game but hasn’t played in five weeks due to a toe injury.

Morant usually serves as the Memphis captain, but after receiving his second technical foul with 43 seconds remaining in the second quarter, he exited the game against the Thunder. The Grizzlies’ confidence hasn’t been harmed despite losing to an undermanned Oklahoma City team on Saturday. The night before, Memphis beat the Eastern Conference’s top-ranked Milwaukee Bucks by 41 points.

Although the Nuggets also have a talented roster, Nikola Jokic, a two-time MVP, is the player whose name is circled on every scouting report. He has been playing great this season and just finished a historic game versus Charlotte.

Jokic joined Wilt Chamberlain as the only players to record a triple-double with the following totals: 40 points, a career-high 27 rebounds, and 10 assists. In the first half of the 119-115 victory, Jokic had a franchise-high 20 rebounds. The drawback of Jokic’s performance was that he had to save Denver after the bench allowed a 14-point lead to slip away in the final quarter. In the fourth quarter, Jokic scored 13 points, including three free throws that sealed the victory. The Hornets’ bench outscored the reserves 46-18, which revealed a hole for the Nuggets.

The Nuggets continue to play without Michael Porter Jr. who has missed 12 games with a heel injury. When he does return, Bruce Brown will be able to come off the bench, strengthening that unit. Jamal Murray, Jeff Green, and Kentavious Caldwell-Pope are all listed as questionable for tonight.