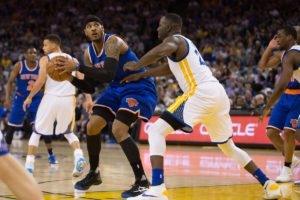 The Knicks are as good as any team in the NBA right now. That’s what Indiana head coach Rick Carlisle said after his Pacers lost to New York on Sunday night. Tonight, the Knicks will face the defending NBA champion Golden State Warriors who will play without Stephen Curry.

The Knicks, of course, beat the Pacers 109-106 and the Warriors beat the Toronto Raptors 126-110 on Sunday. After their wins, both teams were off yesterday. The Knicks won their seventh straight with the win over Indiana. New York won by fewer than 10 points for just the second time in their current winning streak.

Aaron Nesmith’s dunk gave the Pacers a 104-98 lead with 1:56 left, but New York’s revamped defense held Indiana to two free throws and two turnovers the rest of the games. Indiana went 0-for-3 from the field over the final minute-plus. Jalen Brunson started the comeback with a 3-pointer and a layup, and Julius Randle finished it with six free throws in the final 45 seconds. His second free throw of the six-pack put the Knicks ahead for good.

The Warriors won their fifth game without Curry on Sunday. The two-time scoring champion and key to Golden State’s four recent NBA titles will miss several weeks due to a left shoulder subluxation he suffered in a 125-119 loss to the Pacers last Wednesday. He missed three games from Nov. 4 to Dec. 7 due to a left ankle injury and load management.

The Warriors’ first win without Curry since April’s 2021-22 regular-season finale against the New Orleans Pelicans. Golden State moved within a half-game of the Minnesota Timberwolves for the 10th spot in the Western Conference standings.

In addition to Curry, the Warriors will also be without Andrew Wiggins and Andre Iguodala. Klay Thompson and Jonathan Kuminga are both listed as probable for tonight.

In addition to their seven straight wins, the Knicks have covered in all seven games. The Knicks have won the last seven games by an average margin of 14.4 points. Five of the seven wins have been by double digits and, as mentioned, the defense has been outstanding. As a result, six of the seven games have seen the total go Under. That gives the Knicks a 12-17-1 O/U record for the season.

Golden State is just 2-5 SU in its last seven games. They are 13-3 SU in the last 16 games against the Knicks. The Warriors are also 6-3 ATS in their last nine against New York. In their last eight trips to New York, Golden State is a perfect 8-0 SU.