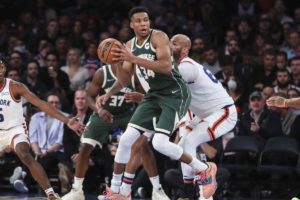 The New York Knicks are slumping and will play their third game in four days when they take on the defending NBA champion Milwaukee Bucks tonight. The Knicks have just one win in their last six games and they haven’t fared well against the Bucks recently. New York has won just four of its last 18 games against Milwaukee.

Part of the problem is on offense where the Knicks have scored more than 96 points just twice in their last six games. In a 110-96 loss to Miami on Wednesday night, leading scorer Julius Randle totaled 11 points. Seven of them came with the game out of reach. Miami led by as many as 30 points in the third quarter. The trio of RJ Barrett, Evan Fournier, and Kemba Walker were a combined minus-93 in the loss to the Heat.

The Knicks may have some optimism going into tonight though. They beat Milwaukee earlier this season. The Knicks won 113-98 in Milwaukee back in early November. The only problem with that win was that the Bucks were missing several players due to injury. Less than a week after that game, the two teams met again in Milwaukee. The Bucks won 112-100.

The Bucks are just hitting stride this season as Khris Middleton and Jrue Holiday are finally healthy. Along with Giannis Antetokounmpo, the trio forms the heart and soul of the Bucks. That heart and soul didn’t fare too well the other night. Milwaukee lost 115-99 to a surging Cleveland team. Holiday went 2-for-9 from the floor and had just four points. The Bucks bench was awful as well and managed just 15.

With the loss to Cleveland, the Bucks dropped to sixth in the Eastern Conference standings. The race in the East is a tight one. Despite being in sixth place, the Bucks are just two games out of first place and a half-game behind third-place Cleveland.

The Bucks also play well at home where they are 17-8 this season. One of those wins was against the Knicks and they also beat New York by 15 on the road this season. Where the Bucks struggle is against the spread where they are just 9-16 ATS at home this season. The Bucks are just 1-5 ATS in their last six games. Also worth noting is the Bucks ATS record when favored by nine or more points. Milwaukee has covered the spread just five times in their last 17 games when favored by nine or more.

All three Bucks-Knicks games this season have ended up Under tonight’s total of 217.5. In the series between the two teams, the Under has been the trend hitting seven times in the last ten games. The Under has hit in five Knicks games in a row against Central Division teams and the total has gone Under in four of the last five games in this series.