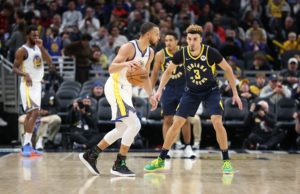 The Indiana Pacers had won one game in their previous 11 and had not won a road game in eight tries, but somehow, they figured out a way to beat the Los Angeles Lakers last night. Domantas Sabonis had a triple-double – 20 points, 12 rebounds, 10 assists – and Caris LeVert scored 30 to lead the Pacers to a rare win. For some reason, the Pacers seem to have success against Western Conference teams and tonight they will face another one – the Golden State Warriors.

Indiana (16-29) has covered the spread in 12 of their last 16 games against teams from the West. The Pacers are also 4-2 ATS in their last six games at the Chase Center. The problem tonight for Indiana is related to Sabonis. The Pacers big man suffered an ankle sprain last night and the injury could keep him out the lineup for some time. He is listed as doubtful for tonight.

Myles Turner (12.9 ppg, 7.1 rpg), who leads the NBA in blocks, continues to be out for Indiana. The good news for the Pacers is that point guard Malcolm Brogdon is listed as probable for tonight. Brogdon averages 18.5 points and 5.9 assists per game. Despite Brogdon’s return, the Pacers could struggle as they have only won four of 21 road games this season.

The Warriors had last night off after beating Detroit 102-86 on Tuesday night. Stephen Curry and Klay Thompson combined to shoot 12-of-24 from the floor, including 7-of-16 from long range, to lead the Warriors. Thompson had a team-high 21 points. He is still acclimating himself to playing after being out for the past two seasons with injuries. Both will play again tonight, but Draymond Green continues to be on the sideline for Golden State.

Golden State has actually lost three of its past five games and five of its last eight. Still, they have one of the best records in the league at 32-12. They also have one of the higher cover percentages in the NBA. The Warriors are 25-17-2 ATS this season. That includes a 15-6-1 ATS mark at home at the Chase Center.

The Warriors are just 3-6 ATS in their last nine games though.

Both teams lean more toward the Under. The Under is 24-21 in Pacers games this season and 27-15-2 in Warriors games. The total has gone Under in four of the last five Warriors games against Indiana. The Under has also hit in nine of Golden State’s last 13 games when they were playing as the favorite. The Warriors are favored by 11.5 tonight.

The Pacers play at one of the slower paces in the league. They rank 21st in possessions per game (100.8) and will have to slow down tonight in order to have a chance to keep up with Curry and Thompson. The three most recent Warriors-Pacers games have averaged a total of 206.2 points. The previous ten averaged 215.5, which is still below tonight’s total of 216.