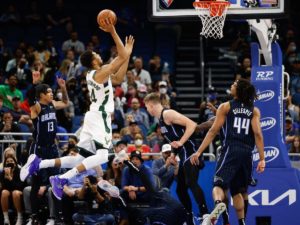 In a game between two of the best teams in the Eastern Conference, you might be surprised to see that the defending champion Milwaukee Bucks are favored by 9.5 points. Then, you look at the Chicago Bulls injury report and you immediately understand why.

The Bulls, who still sit atop the Eastern Conference standings (though it may not be for long) will play with Zach LaVine and Lonzo Ball tonight. Both have knee injuries. LaVine will return sooner than Ball, but there is no definitive timetable on his return. Ball will have surgery to repair a torn meniscus in his left knee and will miss the next six to eight weeks. Without those two, the Bulls will have a hard time keeping up with a very healthy Bucks squad.

Milwaukee will have its entire Big Three – Giannis Antetokounmpo, Khris Middleton, and Jrue Holiday – in the lineup tonight. The only player of significance out tonight is Brook Lopez. Holiday’s return from offseason knee surgery has had a great impact on the Bucks. His defensive effort against Memphis and Ja Morant helped Milwaukee beat the red-hot Grizzlies by 12 points, 126-114.

There have been some chinks in the Bucks’ armor lately. Milwaukee has three wins in its last seven games. The wins were all big ones – Brooklyn, Golden State, and Memphis – but the Bucks lost consecutive games to Charlotte, one to Toronto, and another to Atlanta.

Milwaukee does play well at home though. They are 14-4 straight up in their last 18 home games. The Bucks have struggled to cover spreads. They are 21-26 ATS for the season and just 9-14 ATS at home. The Bucks are, however, 25-11 straight up whenever they play as the favorite.

Tonight’s total is set at 227.5, which may seem a bit high even for the No. 4 (Bucks) and No. 9 (Bulls) scoring teams in the league. In the last ten games between the two teams, the Under has cashed seven times. None of the ten games had a total below 220.5. In those ten games, Chicago has struggled to score averaging just 104.6 points a game. Somehow, the Bulls are going to have to make up for the 37 points-plus that LaVine and Ball average.

The Bucks trend Under with a record of 20-27 Over/Under this season. The Under is 14-9 in Milwaukee home games and the total has gone Under in five of the Bucks last seven games. Against Central Division opponents, the Under has hit in six of the last eight for Milwaukee. It’s the same for Chicago. The Under has cashed in 13 of the last 17 games in the division.