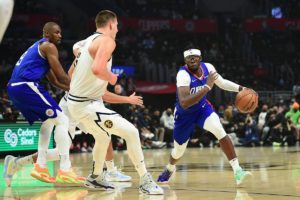 Kawhi Leonard is demonstrating indications that he has recovered from his serious knee injury and is back to his All-Star form. When the Los Angeles Clippers play host to the soaring Denver Nuggets tonight, Leonard aims for his third consecutive strong performance and also hopes to score 24 or more points for the eighth time in 12 appearances.

Leonard missed all of last season after tearing the ACL in his right knee in June 2021. Due to knee flare-ups, he missed more time earlier in the season, but recently he has felt better and his performance is reflecting that.

The two-time NBA Finals MVP recorded a season-high 33 points and tied his season-best of nine rebounds as Los Angeles defeated the Dallas Mavericks 113-101 at home on Tuesday. Last Sunday, Leonard scored 29 points in a 112-108 loss to Atlanta.

The Clippers’ ended a six-game losing streak with the win over the Mavericks. Leonard shot 9-of-12 from the field and scored 11 points in the opening quarter to set the tone. Additionally, in six of his last seven appearances, Leonard has logged 34 or more minutes. Against the Hawks, he played a season-high 38 minutes.

Norman Powell has been playing well for LA. He added 27 points in the win over Dallas. The Clippers committed just 10 turnovers and had a 46-32 advantage in rebounds. Los Angeles played without their other star, Paul George. He has missed four straight games for the Clippers and is listed as out tonight. Luke Kennard has also been ruled out for tonight.

Denver continued its dominance on Wednesday night when the Nuggets pounded Phoenix 126-97. It was Denver’s fourth straight win and 14th victory in the team’s last 17 games. Over their last four games, all at home, the Nuggets have averaged 122.8 points per game.

In the win over the Suns, Denver guard Jamal Murray left in the fourth quarter with an ankle injury. Murray just returned this season from a knee injury that forced him to miss all of last season. He is listed as questionable for tonight. Jokic (wrist) is also listed as questionable, but he has continued to play despite the pain. This season, he is averaging 24.9 points, 11 rebounds, and 9.7 assists per game.

This season, the Nuggets are 2-0 against the Clippers, and they have won seven of the previous eight meetings. In addition, Denver is 10-5 ATS in the last 15 games against LA. The Nuggets are also 7-1-1 ATS in their last nine games.