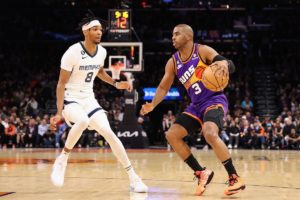 Phoenix and Memphis are two NBA teams headed in opposite directions. When the Suns face the Grizzlies tonight to end a four-game road trip, they will take on a team that has won nine straight games. That is the longest active streak in the league. Phoenix, on the other hand, has dropped 11 of its last 13.

In seven appearances during the Grizzlies’ streak, Ja Morant is averaging 28.9 points per game. The All-Star point guard led the team to a 130-112 victory over the Indiana Pacers on Saturday with 23 points, 10 assists, and possibly the dunk of the year.

For Memphis, which is a season-high 16 games over.500, Desmond Bane added 25 points. Indiana head coach Rick Carlisle was most definitely converted by the Grizzlies. Carlisle believes Memphis is the “best squad on earth right now.”

The Suns continue to play shorthanded. Phoenix is without Devin Booker (groin), Cameron Payne (foot), Chris Paul (hip), Landry Shamet (hip), and Cam Johnson (hip) are just a few of the Suns’ ailing players. Shamet has missed three games in a row, but he is the only one of the bunch that is anticipated to make a comeback tonight. Johnson may be back in the lineup soon but not until later this week.

Damion Lee had a career-high 31 points for Phoenix on Friday, but they still lost to the Minnesota Timberwolves 121-116. Mikal Bridges added 24 as the Suns lost for the eighth time in their last nine games. Deandre Ayton scored 11 points and pulled down 11 rebounds in his first game back after missing two due to a sprained left ankle, but the 7-foot center shot just 5-of-18 from the floor overall.

Saben Lee, a third-year guard, impressed Suns head coach Monty Williams with his performance. Lee scored 12 points in just 13 minutes off the bench and could get additional playing time against the Grizzlies.

To keep up with Memphis, which is averaging 124 points during its winning streak, the Suns will need an almost superhuman effort. Memphis F Brandon Clarke scored 11 points in his first game back against Indiana on Saturday after missing the previous six due to pain in his left hip. In his first game of the year, Ziaire Williams started and finished with 13 points. Dillon Brooks, who is listed as probable tonight with a sprained right ankle, was replaced by Williams in the starting lineup. The Grizzlies are also keeping an eye on the health of forward John Konchar, who was absent from the game on Saturday due to a non-COVID sickness.

While Memphis’ winning streak has occasionally made them appear invincible, head coach Taylor Jenkins believes the team still has space to improve. Memphis and Phoenix have split their two games this year. The road team won both games.