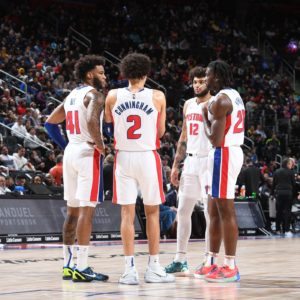 It almost seems unfair to unleash the triple-double machine against the team with the NBA’s worst record given how Luka Doncic is performing against better competition. Tuesday’s 116-113 victory over the defending champion Golden State Warriors was the third 40-point triple-double of the season for Doncic. Tonight, Doncic and the Mavericks head to Detroit to take on the struggling Pistons.

Doncic recorded his 51st triple-double in his career with 41 points, 12 rebounds, and 12 assists. He added four steals as well. With 20 games of 40 points or more in his career, he is now tied with Dirk Nowitzki for second place in the franchise’s history. Mark Aguirre is the franchise leader with 22.

Despite drawing opponents’ best defenders, Doncic is averaging a league-best 33.5 points. He also averages 8.8 rebounds and 8.6 assists per game. Spencer Dinwiddie is the team’s second-leading scorer at 17.0 points per game. He was called for a flagrant-2 foul for elbowing Jordan Poole in the face during the fourth quarter of the Warriors game and was ejected. Dallas gained a three-point lead thanks to a Doncic basket, and the Mavericks held on as Klay Thompson of the Warriors missed a last-second opportunity to tie the game with a 3-pointer.

Veteran guard Kemba Walker could make his Dallas debut tonight. Walker was acquired by the Pistons in an offseason trade from New York but was subsequently released by the team. On Tuesday, Walker agreed to a one-year deal with the Mavericks.

The Pistons have won just five games so far this season. They have lost their last three in a row. That includes Tuesday night’s 140-110 loss to the New York Knicks. This is Detroit’s second straight home game after a six-game road trip. Pistons head coach Dwane Casey said his team played soft defense against the Knicks which allowed them to shoot well from the field.

Detroit struggles to stay competitive with star player Cade Cunningham out indefinitely with a shin injury. Jaden Ivey, the rookie backcourt partner of Cunningham, is one of several other important players who have missed games due to injury. He missed the Knicks game due to knee pain and is listed as questionable for tonight.

Isaiah Stewart led the team with 19 points on Tuesday, including a career-high five 3-pointers. It was his first game back after missing seven in a row due to a toe injury. Alec Burks, a backup guard, failed to score in 15 minutes of play on Tuesday after scoring 16 or more points in each of the previous six contests.