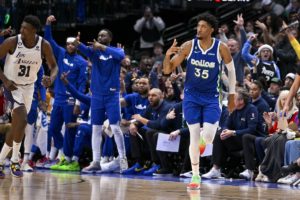 The Atlanta Hawks (22-22 SU, 18-25-1 ATS) will visit the Dallas Mavericks (24-21 SU, 15-28-2 ATS) on Wednesday at the American Airlines Center in an effort to win their fourth straight game. The Hawks defeated the Miami Heat 121-113 on Monday earning their third consecutive victory. Jimmy Butler led all scorers with 34 points for the Heat, but Dejounte Murray and Trae Young outscored a Hawks squad that had six players in double figures to secure the victory.

The Hawks have turned things around, winning five of their last seven games, following a four-game losing streak to end 2022. Young has been on fire this month, averaging 27.4 points per game and going over the 30-point mark three times. Seven players are averaging at least 10 points per game for Atlanta in January, and the team is seeing solid performances from every position in the lineup.

Dallas has lost two games in a row, both to Portland. The Trail Blazers defeated the Mavericks in a back-to-back on Saturday and Sunday. The Mavs gave up an uncharacteristic 136 and 140 points in the two games. On Sunday, Damian Lillard scored 40 for Portland in a 140-123 Blazers win.

Part of the issue on Sunday was that Dallas didn’t play three starters, including All-Star Luka Doncic.

Dorian Finney-Smith (hip) and Tim Hardaway Jr. (ankle) also sat out Sunday. Hardaway remains out for tonight, but Finney-Smith is expected to play his first game since December 19. Doncic is listed as probable. He played against Portland on Saturday but scored just 15 points. Doncic continues to lead the NBA in scoring averaging 33.8 points per game.

Dallas has played a respectable defense thus far this year, allowing 112.3 points per game. They are tied for 11th in the league. The Mavs’ defense will be challenged once again after giving up 276 points to the Trail Blazers over the weekend. Facing Young and a Hawks team that ranks No. 3 in the NBA in road scoring will put the Dallas defense to the test.

Dallas has won four of its last five home games against Atlanta. The Mavs are just 1-4 SU and ATS in their last five games. The Over has hit in eight of Dallas’ last 12 games and five of its last six home games. In addition to the Hawks’ current winning streak, Atlanta is 13-4 ATS in its last 17 games.