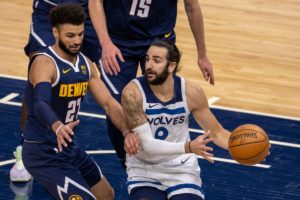 The Nuggets haven’t suffered many losses lately, but one of those defeats occurred on January 2 at Minnesota. Denver has only lost three times since December 6, and the Nuggets will have the chance to avenge themselves tonight when they host the Timberwolves.

The Timberwolves’ 124-111 victory over Denver earlier this month marked the beginning of a turnaround for them. Following that victory, Minnesota has won six of its last eight games. The Twolves lost by one, 126-125, to Utah on Monday night. They have battled through this streak despite not having Karl-Anthony Towns. The Twolves star has been out since Nov. 28 with a strained right calf. He is expected to remain out for a few more weeks.

Minnesota could also be without C Rudy Gobert, who the team acquired in the offseason from Utah. Gobert suffered a groin injury on Monday and is listed as questionable for tonight. Without Gobert, it will be that much harder to stop two-time defending NBA MVP Nikola Jokic. In the Jan. 2 game, Jokic scored 24 points, one point below his season average. That was with Gobert in the Minnesota lineup.

The Timberwolves will depend even more on Anthony Edwards, who is averaging 23.9 points and 6.0 rebounds in his third season after being selected first overall in the 2020 NBA draft. In that first game against Denver earlier in the month, Edwards scored 29 points. Edwards dished to a wide open Jaden McDaniels who missed a three-point attempt at the buzzer that would have beaten the Jazz.

Jokic is on pace to average a triple-double for the season and is averaging a career-high 9.8 assists per game. He recorded his NBA-leading 13th triple-double of the year on Tuesday, finishing with 36 points, 12 rebounds, and 10 assists. He accomplished this while only missing one of the 14 shots he attempted, raising his field-goal percentage to 62.7 percent. That number ranks sixth among qualifiers in the league.

Jokic isn’t the only reason Denver, which has won 17 of its previous 20 games, is leading the Western Conference. Murray, Aaron Gordon, and Michael Porter Jr. have all performed admirably, and the bench has improved as the team’s health has gotten better.

Denver has won seven straight games and 14 in a row at home. The Nuggets are 9-2-1 ATS in their last 12 games and they have won the last three in a row against Minnesota. Denver is 20-3 SU and 14-8-1 ATS at home so far this season.

As mentioned, Minnesota is 6-2 SU in its last eight games. They have struggled on the road though going 1-5 SU in their last six games away from home. On the road against Denver, the Twolves are 6-0 ATS. The Over is 9-4 in Minnesota’s last 13 games. In the last five against Denver, the Over is 4-1. In the Nuggets’ last five games, the Under has cashed four times. The Jan. 2 game totaled 235 points and went Over. The last four games in the series have gone Over.