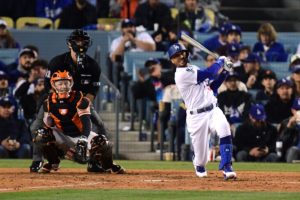 The Giants begin the second half of the 2022 season 12.5 games behind the Dodgers who lead the NL West with a 60-30 record, the best in the National League. San Francisco won five of its last six before the All-Star break and seven of its last ten to move to 48-43 on the season. In their last series against L.A., the Giants swept the Dodgers in three games. That series was in San Francisco.

Carlos Rodon (8-5, 2.66) opted out of the All-Star game due to a split fingernail. He’s ready to go for tonight after being extremely sharp in his last two starts before the break. He pitched a complete game against San Diego allowing just one earned run while striking out 12 in a 3-1 win over the Padres. He followed that up with five innings of one-run baseball against the Brewers. Rodon struck out seven, but the Giants came up short in a 3-2 loss.

Rodon will face a red-hot Dodgers lineup. Los Angeles has won 11 of its last 12 games. The Dodgers are second in runs per game (5.13) and lead the NL in just about every major offensive statistical category. L.A. won its last four games in a row before the break. In those four games, they scored a total of 27 runs. Over their last ten, the Dodgers are averaging nearly six runs per game.

Dodgers ace Clayton Kershaw started the All-Star game for the National League, so he will not pitch tonight. Instead, it will be Mitch White for the Dodgers. He is 0-2 with a 4.20 ERA this season. His last start was his worst of the season. White pitched five innings and allowed six earned runs in a 7-6 loss to the Cardinals. He has been effective at times this season, but he doesn’t go as deep in games as the other Dodgers starters.

The Giants’ offense ranks right behind the Dodgers with 4.80 runs per game. In winning five of their last six games, San Francisco averaged over seven runs per game in the five wins. While the Giants have had recent success, it has come mainly at home. San Francisco is just 4-8 SU in its last 12 games on the road. As mentioned, the Giants swept the Dodgers at home but lost an earlier two-game series to the Dodgers in Los Angeles.

In the last ten games in this series, the O/U record is 3-6-1. The last two games in the series produced run totals of 5 and 2 runs with four of the last six games going Under. In White’s last five starts, four of the games ended with totals of 8 or fewer runs. One of those was against the Braves, the fourth-highest scoring team in the majors.