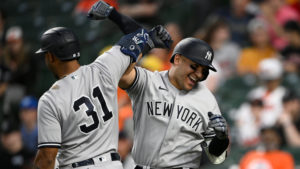 One of the best teams in MLB over the last month has been the Baltimore Orioles. With the way the O’s have been playing recently, there is now plenty of intrigue over this Yankees-Orioles weekend series. Baltimore is a legitimate playoff contender with a shot at earning an AL wild card. Tonight, they will host the best team in baseball – the New York Yankees.

The Yankees got off to a poor start in the second half by dropping both games of a doubleheader to Houston yesterday. Over the Yankees’ last ten games, they have won just three times. They even lost a series to the Cincinnati Reds. Baltimore, on the other hand, has won eight of its last ten and 11 of its last 13. Both losses were to Tampa Bay in the O’s most recent series.

Tonight, Baltimore will send its most reliable starter to the mound. Tyler Wells is 7-5 on the season and has a 3.38 ERA. He has faced New York twice already this season and has similar statistics in each start. Wells pitched five innings in both games and allowed two earned runs. Baltimore wound up losing both games by scores of 5-2 and 2-0, but both of those games came before the end of May. Since May 30, Baltimore has won eight of Wells last nine starts. The O’s had won eight straight starts by Wells until his last start against Tampa Bay last week.

If there is a knock against Wells, it is that he doesn’t pitch deep in games. He has yet to go past the sixth inning in a game this season and typically he will give five strong innings before giving way to the Orioles bullpen. That’s actually a good thing since Baltimore has the fourth-best bullpen in terms of ERA. The O’s relievers also post a FIP that is sixth in MLB.

New York will go with one of their reliable starters – Jameson Taillon. He actually has the most wins of all the Yankees starters. Taillon is 10-2 and sports a 3.86 ERA. He had a recent stretch of four starts in which he allowed 6, 3, 5, and 6 earned runs. In his last start though, Taillon pitched six innings and gave up just one earned run as New York beat Boston 14-1.

The Yankees’ bullpen is even better than Baltimore’s ranking second in ERA and first in FIP. Collectively, the pitching staff is one of the big reasons why New York has the best record in baseball at 64-30. While the Yankees have lost seven of their last ten, they are 8-2 SU in their last ten games against Baltimore.