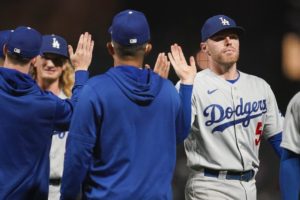 The Dodgers have taken the first two games of this four-game series with their West Coast rivals, the San Francisco Giants. Last night, starting pitcher Tyler Anderson picked up his 12th win of the season despite giving up five earned runs, all of which came in the fifth inning. His Dodgers teammates had carved out a 6-0 lead by the top of the inning. Anderson would pitch one more inning before giving way to a bullpen that allowed just one hit the rest of the way. The Dodgers have now won six straight against the Giants. San Francisco will try to stop the bleeding with Alex Cobb (3-5, 4.39) on the mound tonight.

Cobb has made 16 starts this season for San Francisco. Over his last eight starts, the Giants have won just twice. Cobb has pitched at least five innings in all eight of those starts. One of them was just over a week ago against these very same Dodgers. Cobb went 5.2 innings, gave up eight hits and four earned runs in a 7-4 loss. Cobb typically pitches better at home where his ERA drops to 2.84. The problem is that Cobb just doesn’t get enough run support. His home record is just 2-5 and over those last eight starts the Giants scored more than three runs just twice (and they lost one of those games).

Cobb will go up against Dodgers left-hander Julio Urias who is 10-6 with a 2.71 ERA. The Dodgers have won Urias’ last eight starts in a row. Only once in those eight starts did Urias allow more than three earned runs. Urias has actually pitched slightly better on the road this season. He has a 6-4 record away from Dodger Stadium but a much better ERA at 2.49 and a WHIP of 0.98. Urias doesn’t allow many baserunners and that has helped him over the last month and a half.

With last night’s win, the Dodgers have now won six of their last seven games. They have won nine of their last ten games on the road. L.A. has also won 16 of the last 20 games against National League opponents. The Giants have just three wins in their last 13 games. They are fading in the NL West standings. San Francisco is 51-53 and the Giants are now 19.5 games out of first place. They trail the second-place San Diego Padres (60-46) by eight games.

With last night’s 14 runs, both games in this series have gone Over the total. That makes it four of the last six Dodgers-Giants game totals going Over. The Over is 4-0 in the Giants last four division games and 5-1 in their last six games against a left-handed starting pitcher. The Dodgers are still the second-highest scoring team in MLB but, ironically, their season O/U record is 41-54-8. On the road, that record is 20-29-4.