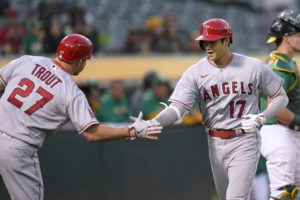 Angels’ star Shohei Ohtani was not traded away at the deadline as many had speculated. He’ll stick around in 2022 and will be eligible to be a free agent in 2023. He has expressed a desire to play for a winner, something that the Angels haven’t done in a long time. Heading into Wednesday, the Angels are 44-59 and in fourth place in the AL West. They are 22 games out of first place and are six games ahead of last-place Oakland who happens to be their opponent tonight. Ohtani will take the mound for his 18th start of the season. He’ll match up against the A’s James Kaprelian.

Ohtani is now 9-6 on the season after having lost each of his last two starts. He pitched 6.1 innings against Atlanta and got rocked for six earned runs. In his last start, he pitched six innings against Texas and allowed just two earned runs. Ohtani has struck out double-digit batters in six straight starts and he had a stretch of four consecutive starts without allowing a single earned run.

The Athletics will start the right-handed Kaprelian tonight. It will be his 17th start of the season. He is 2-5 with a 4.50 ERA. Oakland has won his Kaprelian’s last three straight starts and five of his last six. In those six starts, Kaprelian gave up three earned runs twice and in the other four starts allowed either 0 or 1 earned run. In three career starts against the Angels, he is 2-0 with a 1.03 ERA.