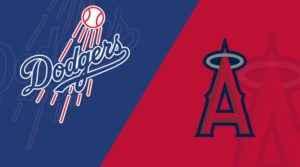 The Battle for Los Angeles is on tonight as the Angels visit the Dodgers in the first of a quick two-game series. Neither team is all that hot right now. The Angels, of course, had that awful 14-game losing streak. They have gone 2-2 since breaking the streak. The Dodgers have just two wins in their last eight games and were swept by the Giants over the weekend. Their normally high-scoring offense was limited to just four total runs in three games against San Francisco. The Dodgers were shut out on Sunday.

Tonight, the Dodgers will have Tony Gonsolin on the mound. The right-hander has been outstanding this season. He has yet to lose this season going a perfect 7-0. His ERA is the second-best in MLB at 1.58. Gonsolin has not allowed more than two earned runs in any start this season. The Dodgers have won eight of his 11 starts this season. Two of the losses were one-run games.

The Dodgers will go up against Angels pitcher Noah Syndergaard, who faced some tough lineups in his last two outings. Syndergaard actually took the loss in his last two starts. He gave up five earned runs to the Yankees in a 9-1 loss but then rebounded to give up a single run against Boston in six innings of work. It wasn’t enough though as the Angels couldn’t produce and lost 1-0 to the Red Sox. What Syndergaard has been able to do is go deep into games and he will need to tonight.