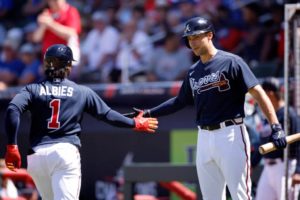 The Braves are off to a somewhat slow start going 3-4 in their first seven games. They split a four-game series with Cincinnati and lost two of three to Washington. Both of those two teams are not projected to do well in 2022. Still, the Braves are the defending World Series champion and they will be sending their ace Charlie Morton to the mound tonight to face San Diego’s Joe Musgrove.

Morton went 14-6 with a 3.34 ERA last season. He suffered a broken fibula in Game 1 of the World Series. His rehab went well and he pitched the season opener for Atlanta. In 5.1 innings, Morton gave up two hits, two runs and struck out five. He earned the win over the Reds and appears to be picking up where he left off a year ago.

Musgrove also had a strong 2021 season. He finished 11-9 overall with a 3.18 ERA. Musgrove recorded a career-high two shutouts last season. Like Morton, he also enjoyed a quality start in his season opener. Musgrove pitched six innings in a 5-2 win over Arizona. He gave up two earned runs and struck out eight. Musgrove looks to get the Padres back on track after losing two of three to the Giants.

San Diego took three of four from Arizona to start the season, but then was outscored 17-7 by San Francisco in losing two of three games. Tonight will mark the second straight tough draw for the Padres who had to go up against Logan Webb of the Giants last night. San Diego lost 2-1.

Playing at home might not be an advantage for the Padres. They have actually lost five of their last six games at home. Dating back to last season, San Diego has also lost 14 of its last 20 games overall. Atlanta doesn’t seem to be fazed by opponents’ crowds. Morton seems to always pitch well on the road. Atlanta has actually won 11 of its last 16 games on the road. The Braves have also had recent success against the Padres with seven wins in the last eight games. Atlanta has also done well in San Diego where they have won six straight against the Padres.

The pitching matchup tonight, Morton versus Musgrove, lends itself to the Under. That is why the total is set at 8. Both pitchers have the ability to shut down opposing offenses. Both teams have also had their struggles at the plate at times this season. San Diego has seen the total go Under in five of its seven games this season.

In the Braves-Padres series, the Under has been the trend too. Five of the last six head-to-head meetings have resulted in the Under. Other than a 10-8 game last year, the other five games resulted in final scores of 4-3, 4-0, 3-2, 2-1, and 4-1. Morton and Musgrove will keep this a low-scoring game. It will be up to the bullpens to keep it that way.