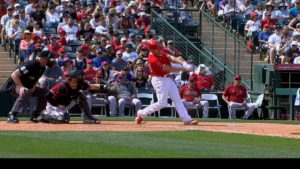 After a busy offseason that saw the Texas Rangers upgrade at several positions, it hasn’t really paid off yet. While it’s still early in the 2022 season, the Rangers are in last place in the AL West. A year ago that wouldn’t have been surprising, but after adding players like SS Corey Seager and 2B Marcus Semien it is a bit of a shock. Tonight, the Rangers will have to contend with Angels P and reigning AL MVP Shohei Ohtani.

While Seager is batting .318 for the Rangers, Semien, who hit 45 homers last year in Toronto, is only hitting .091 so far. That is only part of the problem as the Rangers’ pitching has been awful. Rangers pitchers are giving up an average of 9.8 hits and six runs per game. The Rangers rank third-worst in MLB in both categories.

Dane Dunning (0-0) gets the start tonight for Texas. He pitched five innings and allowed three earned runs against Toronto is his first start of the season. The Rangers would go on to lose 4-3. In his first full season as a starter in 2021, Dunning went a very unimpressive 5-10 with a 4.51 ERA And 1.44 WHIP.

What will help Dunning and the Rangers is an Angels offense that is also struggling. Remember, Ohtani hit 46 home runs and had 100 RBIs last season. So far this season, he is hitting .200. Teammate Mike Trout is off to a slow start too batting just .160 and between the two stars, they have just one RBI in 2022. That came on a solo homer by Trout.

Texas will likely have some issues with Ohtani on the mound. He picked up where he left off last season in his Opening Day start against Houston. In 4.2 innings, Ohtani gave up four hits and allowed one earned run. He struck out nine, but the Angels did lose. Last year, Ohtani went 9-2 with a 3.18 ERA and a 1.09 WHIP in 23 starts.

The Angels swept a two-game series from Miami and had yesterday off to prepare for the series with Texas. L.A. is averaging just 3.3 runs per game, so it’s no surprise that five of their last six games have gone Under the total. In six of the last nine games against the Rangers in Texas, the Under has cashed. It’s the same in the last nine overall meetings. The Under has hit in six of the last nine Angels-Rangers games. In the final series of last season, the final scores were 7-6, 7-2, and 5-2 resulting in a 2-1 O/U mark.