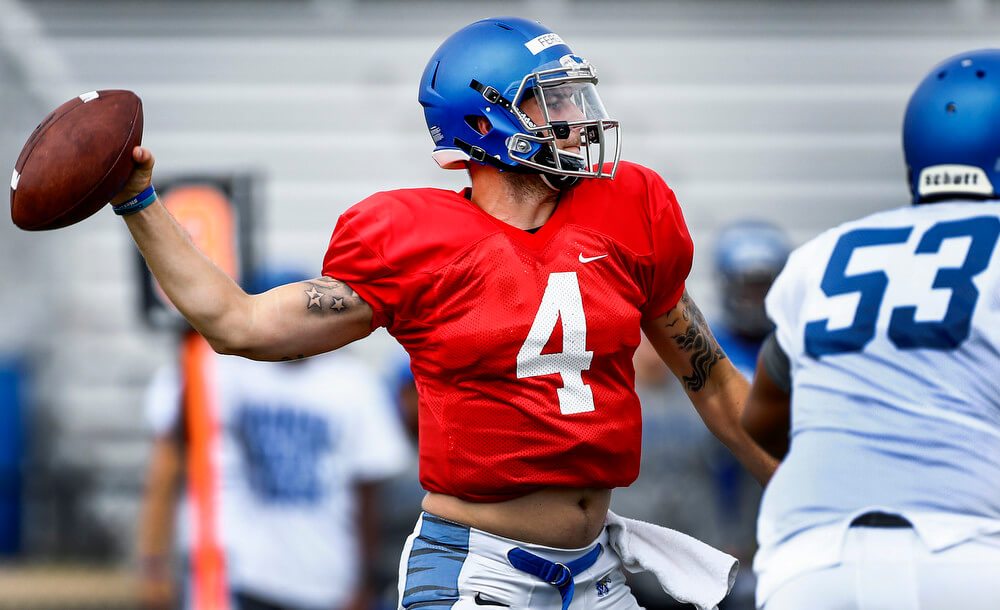 New offensive coordinator Darrell Dickey steps into a great situation as the Tigers welcome back nine starters on offense.  My models are calling for Memphis to have the most potent offense in the American Athletic Conference behind veteran quarterback Riley Ferguson.

The senior gunslinger finished last season with 3,698 passing yards and a 63.2% completion rate (32-10).  Ferguson is the beneficiary of an experienced Memphis offensive line that has 103 career starts, including senior right guard Gabe Kuhn and junior center Drew Kyser.

After paving the way for 159 rushing yards per game at 4.3 yards per rush attempt last season, I expect the Tigers’ offensive line to improve upon those numbers in 2017.  The Tigers’ top three running backs return, including senior tailback Doroland Dorceus, who averaged a team-best 6.1 yards per rush play last year.

Ferguson will once again have a talented group of wide receivers to throw to, including senior Anthony Miller who led the team with 1,434 yards at 15.1 yards per reception (14 touchdowns).  Senior Phil Mayhue joins Miller to form one of the best wide receiving units in the American Athletic Conference.

Defensive coordinator Chris Ball’s unit grossly underperformed last season, allowing 28.8 points at 455 yards per game despite having seven starters back.  The strength of this year’s stop unit is the linebacking corp., which welcomes back five players with starting experience from last season.  Sophomore linebacker Austin Hall is poised to have a breakout campaign and will be a joy to watch throughout the 2017-18 season.

My greatest concern involves the Tigers’ secondary, which loses 73 career starts from last season.  However, coach Norvell has brought in two cornerbacks from Oklahoma (Marcus Green & Tito Windham, juniors) and another transfer from Missouri (Shaun Rupert, senior) so this unit could certainly outperform my expectations.

The Tigers’ elite special teams unit will miss 1st Team AAC placekicker Jake Elliott, who was drafted by the Cincinnati Bengals in this year’s NFL Draft. Elliott eclipsed Stephen Gostkowski’s school records for career field goals and scoring!  However, special team’s coordinator Joe Lorig will once again fashion a Top-40 unit as everyone else returns in 2017.