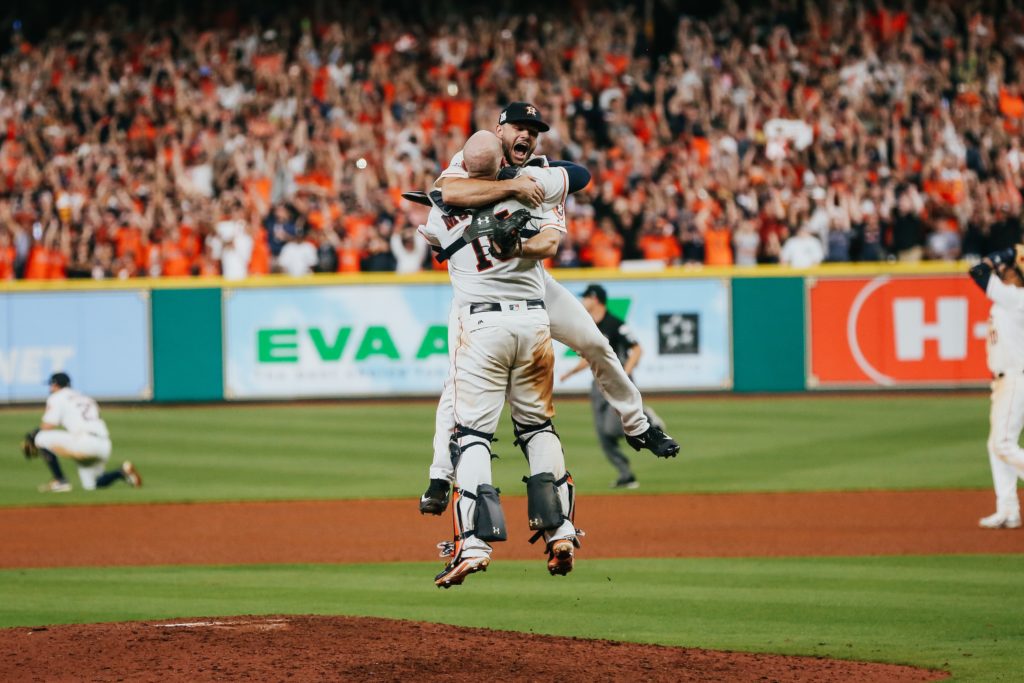 The Houston Astros are your defending World Series champs as we head into the 2018 MLB Season. Just three short years after moving from the National League, the ‘Stros won their first championship in franchise history representing the American League. It was a difficult & eventful year to say the least in Houston with Hurricane Harvey, but on the field, the Astros were certainly “Houston Strong”. During the regular season, the Astros had the best offense without a doubt. They scored the most runs, achieved the best batting average, and even the best on-base percentage.

So, can the Astros continue their historic run and repeat? Will another American League team come in and steal their thunder or will the World Series be reclaimed by a National League power? For the most precise sports picks and research on the upcoming MLB Season, purchase our baseball picks here! Continue reading for our major thoughts as we head into the 2018 MLB Season.

Will Houston Astros Repeat in 2018?

Can the Astros repeat as World Series Champs and become the first team to do so since the New York Yankees did it at the turn of the century (1999 and 2000)? Their strategic rebuilding process, their development of players, and the signing of several veterans were all facets that helped the Astros become champions, but what about the Yankees and other AL contenders such as the Indians & Red Sox?

The Astros will have their core weapons returning of Jose Altuve (AL MVP of 2017), George Springer, and Alex Bregman. They also have their strong pitching duo of Justin Verlander & Dallas Keuchal coming back. With all these assets still in-tact, we’re sure they will be alive at the end of the season to contend.

What about the Yankees who faced the ‘Stros in AL Championship Series? Well, Joe Girardi is out, and Aaron Boone is the new skipper so that may cause some difficulty at least in the beginning of the season. With that said, they seem to be developing quicker than most experts believed they would and their minor league prospects are top notch. Oh yea, not to mention, they added Giancarlo Stanton to the already dangerous line-up of Aaron Judge (2017 AL Rookie of the Year), Gary Sanchez, and Didi Gregorius. The Bronx Bombers may be due for their 28th Title in 2018.

The Cleveland Indians are also a team to believe in. After the heart-breaking loss in the 2016 World Series and then being knocked out of the ALDS last year, we think they’ll be pretty hungry for revenge. Their 22-consecutive winning streak last year was nothing short of amazing, but as we saw, it didn’t translate into a ring. Let’s see what the baseball team from the Land can do in 2018.

We feel the National League has a few more potential contenders compared to the American League in 2018 and the LA Dodgers lead the pack in our eyes.

The Los Angeles Dodgers couldn’t have been much closer than they were last year on becoming champions. Similar to their World Series foes of last year, the Dodgers have the luxury of returning vital pieces. Names like Clayton Kershaw, Justin Turner, Corey Seager and Yasiel Puig will all continue to wear the Dodger Blue so we would not be surprised if they represent the NL once again this coming year in the World Series.

All the way across the country from LA, we think DC has the potential to finally make a substantial run. They might just have the most talented group of players in Major League Baseball. Bryce Harper is in a contract year so expect big numbers and to hear his name a bunch. Coupling him are names like: Ryan Zimmerman, Stephen Strasburg, Anthony Rendon, and Max Scherzer. The Nationals can quite literally become National Champions.

Another team in red to possibly love are those Phillies from the city of the brotherly love. The Phillies have signed the big names of Carlos Santana and Jake Arrieta this off-season. Adding those guys to a roster of young stars and a solid defense and they might just have the formula to make a deep run into October.

We hope you enjoy what will be another fantastic MLB Season. The expectations are high for many and there is plenty of young budding talent across the league. If added investments and gaining more income is on your mind, trust us with the best MLB picks this baseball season and choose Oskeim Sports Picks today!