NBA Picks: Utah Looking to Even Playoff Series at One vs. Thunder 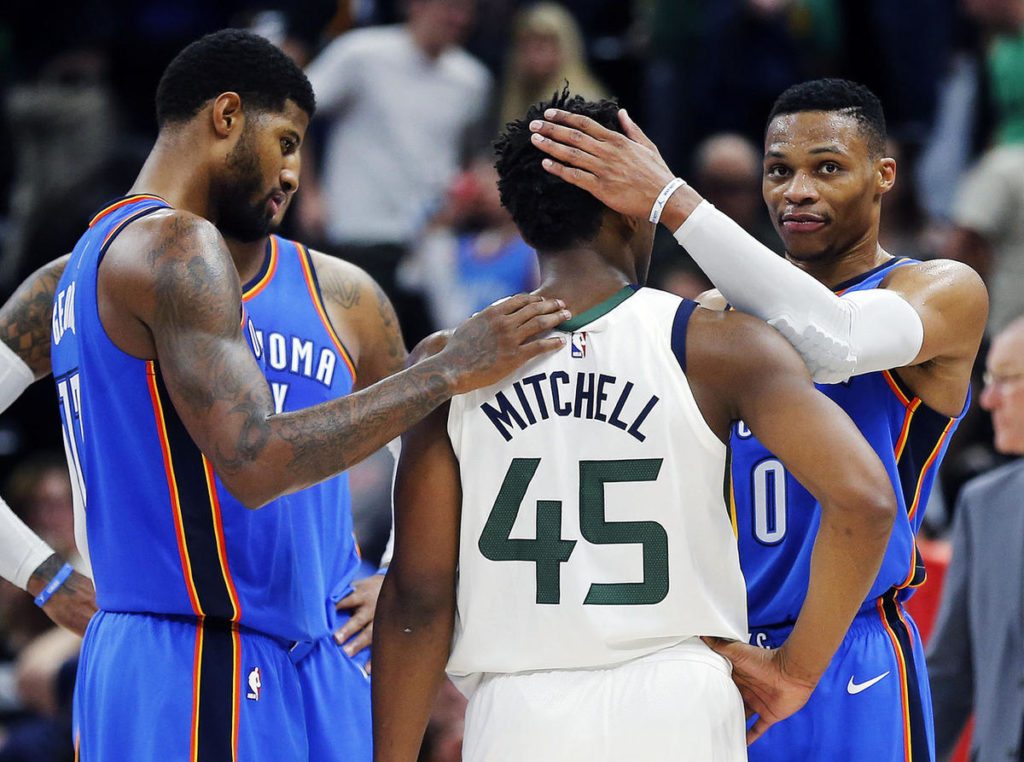 On Wednesday, April 18, Oskeim Sports provides detailed analysis on Game 2 between the Utah Jazz and Oklahoma City Thunder.  Oskeim recommends grabbing the points with Utah as one of his free NBA picks for tonight.

Utah entered the playoffs as one of the hottest teams in the league, winning 28 of its last 34 games. It’s hard to believe that the Jazz were nine games under .500 on January 24 before going on a 25-5 straight-up run to secure the No. 5 seed in this year’s playoffs.

Utah posted the NBA’s best point differential at plus-10.7 per game over that span (only the Rockets compiled more wins than Utah since January 24).

Despite the departure of Gordon Hayward, Utah excelled at creating open looks at the offensive end of the floor. The Jazz created a league-high 19.8 uncontested shots per game during the regular season. Utah’s offense is led by first-year player Donovan Mitchell (13th overall pick), who became the first rookie since Carmelo Anthony to lead a playoff team in scoring.

Utah’s front office dramatically improved the team’s postseason trajectory by trading Joe Johnson and Rodney Hood in early February. Johnson had a plus-minus of -99 points during his tenure in Salt Lake City, while Hood owned a plus-minus of -75 points. Meanwhile, newly-acquired Jae Crowder has posted a plus-minus of +9.2 points per 48 minutes with the Jazz.

Utah was an incredible 33-9 SU in games in which Ingles made at least three 3-pointers. Ingles spaces the floor better than anyone in the league and makes opponents pay for focusing too much on the Ricky Rubio/Donovan Mitchell-Rudy Gobert pick-in-roll.

The absence of Andre Roberson is devastating for Oklahoma City’s already-suspect defense. Roberson finished third in ESPN’s Defensive Real Plus-Minus this season and owned the league’s best personal defensive efficiency for players with at least 1,000 minutes of playing time.

Roberson guarded Mitchell on 78 of Utah’s possessions during the regular season and the Jazz had a -13.8 net point differential on those possessions.

Roberson also forced Mitchell into four turnovers on those 78 possessions. Let’s also note that Roberson led the Thunder in plus-minus per 48 minutes this season (+8.7 points).

Russell Westbrook was second on the team at +6.8 points. Corey Brewer has been tasked with absorbing Roberson’s minutes and the results have been disappointing.

Specifically, Brewer ranks No. 356 overall and No. 57 among small forwards. Paul George is not the answer as the Thunder were outscored by 135 points in 526 minutes during the regular season when George was on the court without Westbrook and Roberson.

Finally, Oklahoma City was a money-burning 16-26-1 ATS during the regular season without Roberson.  Grab the available points with the Jazz as one of Oskeim Sports NBA picks for Wednesday, April 18.

Injury Update: Thunder forward Paul George and Utah guard Donovan Mitchell, the leading scorers for their respective teams in their first-round playoff series, are uncertain for Game 2 on Wednesday because of injuries.

Mitchell suffered a left foot bruise in Game 1, and a Jazz spokesman said he is questionable. The rookie went through portions of Tuesday’s practice.  Thunder coach Billy Donovan said he’d wait until Wednesday to determine George’s status.  He said George was limited in practice and did not do contact work.