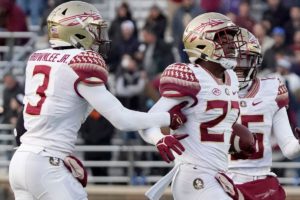 The Florida State Seminoles (8-3 SU, 8-3 ATS) have lost their last three games to the Florida Gators, going 0-3 SU and 1-2 ATS. The Seminoles are enjoying their best season in years and are 9.5-point favorites heading into tonight’s rivalry game.

In the Sunshine State Showdown, the Seminoles opened as an 8-point favorite when the betting opened, but after enough action, the line has increased to Florida State -9.5. Being the underdog may work for the Gators, who have done well this season in that role.

The Gators had plenty of momentum going into their game against the Vanderbilt Commodores last Saturday after two straight victories over the Texas A&M Aggies and the South Carolina Gamecocks. But, despite being 14-point road favorites, Florida lost 31-24. Although it wasn’t enough to win the game, Anthony Richardson finished with a respectable stat line against the Commodores, going 25-for-42 for 400 passing yards, three touchdowns, and one interception.

With a 4-3 SU and 2-5 ATS record this season, Florida has not been a consistent favorite. However, the Gators have fared well when playing as the underdog, going a perfect 4-0 ATS in four games. That includes two outright upsets over Utah and Texas A&M. The Gators were 3-0 ATS on the road prior to their loss at Vanderbilt on Saturday.

Since a three-game losing streak, Florida State has been on a tear. Last Saturday, the Seminoles defeated the Louisiana-Lafayette Ragin’ Cajuns 49-17, easily covering the spread as a 25-point home favorite. Trey Benson led a rushing attack that totaled 251 yards and five touchdowns on 45 carries. Benson had 80 rushing yards and a score in the victory. Over its last four games, Florida State has a perfect 4-0 SU and ATS record.

The Seminoles began the season with a 4-0 SU and 3-1 ATS record before going 0-3 SU and 1-2 ATS in October. Over the course of their current four-game winning streak, they’ve been on fire, scoring 43.3 points per game on offense and allowing just 9.8 on defense. Benson, who has 482 rushing yards and three rushing touchdowns in his last four games, has been a major contributor to the recent surge.

The key for Florida is Richardson, who is capable of making significant plays in both the passing and running games. The Gators will need a great performance from Richardson if they hope to end Florida State’s recent win streak, cover the spread, and pull the upset.

The Gators’ defense, which has struggled against the run this season, has allowed 171.5 rushing yards per game. Florida State has one of the top rushing offenses in the nation. The Seminoles average 213.6 yards per game on the ground. That ranks 16th in the country.