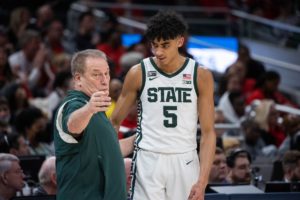 This point spread shouldn’t surprise anyone. Michigan State, which is 11-2 SU and 8-5 ATS in its last 13 first-round NCAA tournament games, underachieved over the second half of the season and Davidson was the best team in the Atlantic-10. The Wildcats lost to Richmond (which upset Iowa yesterday) in the A-10 tournament championship game but still earned an at-large bid.

Davidson lost that game by just two points primarily because the Wildcats’ two leading scorers, Foster Loyer and Hyungjung Lee shot 2-of-16 combined. This is an excellent basketball team that went 27-6 this season and there is some extra incentive for the Wildcats or at least there is for Loyer.

Loyer played high school basketball in Clarkston, Michigan, and played three seasons at Michigan State. His career didn’t go exactly as planned and he wound up at Davidson where his skills have helped the Wildcats have one of their best seasons in school history. Loyer is just one of six players in the Davidson rotation that averages at least 11 points a game and shoots at least 37.9 percent from three-point range.

The Wildcats are one of the most efficient offenses in the nation and one of the best shooting teams in the country. They rank in the 97th percentile in jump shots made and they shoot over 41 percent from three-point range in away games. The location of tonight’s game could be another factor that works in Davidson’s favor. The game is in Greenville, S.C., which is less than two hours from Davidson’s campus.

Michigan State was ranked in the AP top 25 for the first half of the season before falling apart in the second half of the season. The Spartans went 3-7 in their final 10 games of the regular season. They beat Maryland and Wisconsin in the Big Ten tournament and ultimately lost to Purdue. If Tom Izzo’s team is anything, they are inconsistent.

The Spartans are 4-1 ATS in their last five games. In 22 games as the favorite this season, MSU is 18-4 SU and 12-10 ATS. This is an experienced Spartans team. They are loaded with upperclassmen and a number of them were on the 2019 team that reached the Final Four. Last year’s early exit from the tournament could be a motivating factor tonight for Izzo and the Spartans.

With their outstanding shooting, especially away from home, Davidson has seen the total go Over in 13 of 19 games away from home. Michigan State doesn’t shoot as many three-pointers, but when they do they make them. MSU ranks 17th in the nation in three-point field goal percentage. That could be why the Over is 5-1 in Spartan’s last six games.