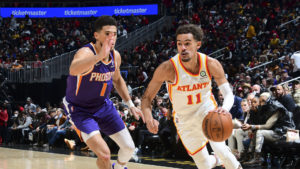 Only one team in the NBA has multiple win streaks of 10-plus games. That would be the Phoenix Suns, who have the best record in the league at 41-9. The Suns have won their last 11 games in a row. Their most recent win was a 121-111 victory over Brooklyn. Leading scorer Devin Booker had 35 points and Chris Paul added 20 along with 14 assists. Phoenix welcomed back C Deandre Ayton who had been out for two weeks with an injury and now the Suns expect Jae Crowder back. The Suns are nearing full strength and continue to win. That doesn’t sound good for tonight’s opponent – the Atlanta Hawks.

Not only has Phoenix won 11 in a row; it has done very well against the number too. The Suns are 7-3 ATS in their last ten games overall. They have covered in five straight road games and they have won their 11 games in a row by an average of 10.9 points per game. What is odd though is that Phoenix has not won in at Atlanta in its last seven tries.

Atlanta lost its first game in two weeks on Monday night falling 106-100 to Toronto. The Hawks didn’t have star Trae Young because of a shoulder injury, but Kevin Huerter picked up the slack with 26 points. It wasn’t enough though as the Hawks perimeter defense failed them. Toronto hit 18-of-36 three-point attempts. That’s not good for the Hawks either. Phoenix is fourth in the NBA in three-point field goal percentage.

Young is expected back in the lineup tonight. The Hawks point guard leads the team averaging 27.7 points and 9.3 assists per game. He is listed as questionable and if he does play it’s likely he won’t be 100 percent. Still, Young could provide what Atlanta needs to get back on the right side of winning. The Hawks had some solid wins in their streak including victories over Milwaukee, Miami, Charlotte, Boston, and the Lakers.

Atlanta is 7-1 ATS in its last eight games. It’s their best stretch of the season as the Hawks are just 22-28 ATS for the season. The Hawks played the Suns in Phoenix back in November. The Suns won 121-118 and covered as 3.5-point favorites. Atlanta is also 6-1 ATS in its last seven home games.

That game in November went Over the total and that has been the trend this season when Atlanta faces Western Conference opponents. So far this season, the Over is 10-3 in such games for the Hawks. Atlanta has given up 120 or more points twice in its last four games and tonight faces a Suns team that is third in the league in scoring.

The Hawks are second in the NBA in offensive efficiency and they struggle on the defensive end where they rank 23rd in points allowed per game (111.2). The total has gone Over in each of the last five Suns-Hawks games.