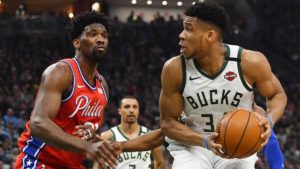 Philadelphia played its worst game since the calendar flipped to January as the Sixers shot just 29 percent from the floor and got pounded by Boston 135-87. MVP favorite Joel Embiid had his lowest point total is two months with 19 as he hit 13-of-16 free throws. The rest of the Sixers starters combined for just 21 points. That isn’t likely to happen again, but Philly runs into a Bucks team that has won five of its last seven games.

Milwaukee’s offense has been rolling up the points lately. On Tuesday night, the Bucks put up 128 on Indiana in a nine-point win over the Pacers. The Bucks scored over 130 points in three straight wins over Portland, the Clippers, and the Lakers. Milwaukee’s offense is now sixth in the league averaging 113.1 points per game.

Giannis Antetokounmpo is doing his best to challenge Embiid for the MVP award this season. The Greek Freak scored 50 in Tuesday’s win over Indiana. That was after a 44-point outburst in the win over the Lakers. Antetokounmpo has had three double-doubles in his last four games. Tonight’s game will be a battle of two MVP favorites, but it will be much more than that.

The Sixers are a top-10 defense and, prior to Tuesday night, held their previous two opponents to 93 or fewer points. Neither opponent – Cleveland or OKC – plays at the pace of the Bucks, but the Sixers have the ability to put the clamps on opposing offenses. Philadelphia hasn’t had much success against Milwaukee recently.

The Bucks have won eight of the last ten head-to-head meetings. The teams have played once this season. Milwaukee won 118-109 in Philadelphia back in November. The Bucks covered as a seven-point favorite. Milwaukee has covered in seven of those ten games and has averaged 119.9 points over those ten contests. In the last eight games, the Bucks are 7-1 ATS against the Sixers.

More recently, Milwaukee had covered four straight with double-digit wins over Washington, Portland, the Clippers, and Lakers. But, the Bucks have failed to cover in three straight. They were blown out by Phoenix 131-107 as a three-point underdog then somehow lost to Portland. The Bucks were 14.5-point favorites in the win over Indiana on Tuesday.

The Sixers are 6-2 ATS in their last eight road games while Milwaukee is just 2-5 ATS in its last seven home games. Philadelphia is one of the top Under teams in the NBA. For the season, the Sixers O/U record is 23-33-1. In their last seven games as a road underdog, the Under is 7-0. The Bucks O/U record is 29-30 overall and their past six games have all gone Over the total. Interestingly though, in the Bucks’ last 21 home games against a team with a winning record, the Under is 15-5-1. That said, the total has gone Over in eight of the last 12 games between the Sixers and Bucks.