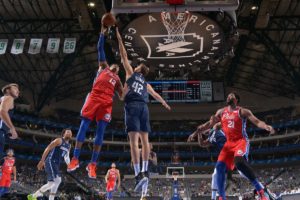 Two playoff-bound teams each had their bubbles burst recently. Philadelphia has been on fire since the Christmas holiday with 15 wins in its last 19 games. Philly had won five games in a row until losing at home on Wednesday night to Washington, which played without its best player Bradley Beal. The Sixers opponent tonight, Dallas, is coming off back-to-back losses to Orlando and Oklahoma City, two of the worst teams in the NBA.

Joel Embiid continues his assault on the MVP. He is averaging 35.9 points per game over his last nine and hasn’t scored fewer than 25 points in a game since before Christmas. He could have his way with the Mavericks tonight. In the Mavs’ last three games they have given up an average of 56 points in the paint per game.

Dallas will be without 7-3 Kristaps Porzingis again tonight. Porzingis has a knee issue and didn’t play in the losses to Orlando and Oklahoma City. Luka Doncic is doing his best to put the Mavs on his back, but it hasn’t been enough lately. Doncic had a 34-point triple-double and a 40-point-10-assist performance in the two losses. He will need his teammates to step up tonight or Dallas could be in trouble.

Philadelphia has played well on the road this season. So far, the Sixers are 17-9 away from home. They also have a respectable 16-10 mark against the spread in road games. Philly has not fared well in Dallas though. The Mavericks have beaten the Sixers in 13 of the last 15 games played at the American Airlines Center. The Sixers will likely be without Seth Curry too. He didn’t play in the loss to Washington and is questionable tonight with a back issue.

Despite the two recent losses, Dallas has been playing pretty well since the holiday break. The Mavs are 13-5 in their last 18 games. They are a mediocre team against the number though. Dallas is 26-25-1 ATS for the season and 12-13-1 ATS at home. What stands out is their 5-13 ATS record in their last 18 games against Eastern Conference opponents. However, the Mavericks have done well against Philadelphia recently covering five of the last seven meetings.

Both the Sixers and the Mavs are very good on the defensive end. Defense is why Dallas has won 13 of its last 18 games. The Mavs rank third in the NBA allowing just 103.7 points per game. That hasn’t been the case recently though as Dallas gave up an average of 115 points in their last two losses.

Still, these are two teams that rank 27th and 28th in pace, and 19 of the Mavericks’ 26 home games this season have gone Under. The last three times these two teams have played, the average total is just 205.3. The Under is 15-3 in Dallas’ last 18 home games and 5-2 in the last seven against the Sixers.