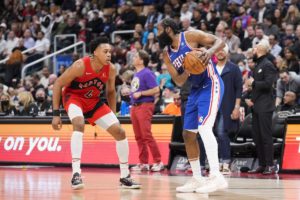 The Sixers now hold a 2-0 lead in the series as it now shifts to Toronto. With the game in Canada, it is well-known that Philadelphia’s best defender, Matisse Thybulle, will not be playing. His vaccination status will not permit him to enter the country. That means the Sixers will be without the one guy that can hold Toronto’s Pascal Siakam in check.

The Raptors and Sixers played each other less than two weeks ago in the regular season. Toronto won at home as Philadelphia played without Thybulle. The result was this – Siakam scored 37 points in a 119-114 Raptors win. That is exactly what Toronto needs here in Game 3. It’s pretty much a must-win for the Raptors who are well aware of the likelihood of coming back from a 3-0 deficit in a playoff series.

Toronto will have to do something to slow down MVP candidate Joel Embiid. After a slow start in Game 1, Embiid totaled 31 points and 11 rebounds in Game 2. James Harden is averaging 18 points in the two playoff games, but Tyrese Maxey and Tobias Harris are both averaging over 20 a game so far. The Raptors will likely have to quicken their pace and take advantage of their third-ranked transition offense if they are to have a shot at winning Game 3.

One thing that gives Toronto a good chance of pulling off the upset tonight is playing at home. The Raptors are 24-17 SU at the Scotiabank Arena and they have won 17 of the last 20 games at home against Philadelphia. The Raptors are 21-20 ATS in home games this year, but they have only covered once in their last five games.

The 76ers have now won four straight and have covered the spread in three straight. Philly is just 2-4 ATS in its last six games against Toronto and they are 0-5 ATS in their last five games on the road. Not having Thybulle tonight could make a huge difference. Toronto could still be without Gary Trent Jr. and Scottie Barnes. Trent is listed as questionable for tonight and Barnes is doubtful. Not having either one or both, will be tough to overcome.

The first game of this series went Over the total and Game 2 went Under as Toronto managed just 97 points. The total has gone Over in five of the last six 76ers games and in four of the last six head-to-head meetings between these two teams. In the last two games played in Toronto, the totals were 233 and 223. Those are both well above tonight’s total.

The last ten games between these two teams have averaged 217.5 points, which is also higher than tonight’s total. If you take the more recent games, the two teams are averaging 228 points in their last three. The Raptors trend Over when playing in front of their home crowd. Toronto’s O/U record at Scotiabank Arena is 24-17.