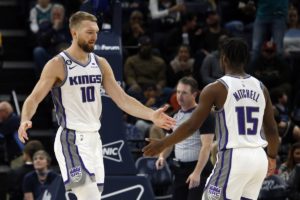 Memphis will complete a back-to-back tonight when they face the Pacific Division-leading Sacramento Kings. The Grizzlies lost their second game in a row on Sunday night dropping a 112-110 decision to Phoenix. Memphis completely outplayed the Suns in the second half but somehow managed to come out on the short end of the stick. The Grizzlies were behind 62-37 at halftime and appeared as if they would come back and beat the Suns.

Ja Morant scored 27 points in a game-high 37 minutes for the Grizzlies, who over the previous five days had lost by one to the Lakers and then came out on the right end of a one-point win against Cleveland. Memphis continues its five-game road trip with a visit to nemesis Golden State. Head coach Taylor Jenkins knows that the Grizzlies can’t afford to string together multiple losses. Memphis had won 11 straight games before losing their last two.

The Kings are currently in the No. 3 slot in the West with six victories in their past seven games. Despite the consecutive losses, the Grizzlies still carry the second-best record in the Western Conference. This will be the final meeting between the two teams this regular season. The Grizzlies have won two of the first three encounters, including a 125-110 rout of Sacramento in the second week of the season.

Tonight’s matchup will feature two of the best defenders in the NBA. Jaren Jackson Jr. of Memphis goes up against Domantas Sabonis of the Kings. Jackson missed his team’s victory in Sacramento in October, and in their last two meetings, he and Sabonis have battled on fairly even terms. Jackson is averaging 18.0 points and 4.0 blocks per game. Sabonis has averaged 13.5 points, 13.5 rebounds, and 6.0 assists.

In each of the three games, Ja Morant of the Grizzlies and De’Aaron Fox of the Kings engaged in a fierce point guard duel, with Morant scoring 22, 34, and 35 points against Fox’s 27, 32, and 19 points. In their most recent game, a 129-127 home loss to the Philadelphia 76ers on Saturday, the Kings saw their six-game winning streak end. Fox led the Kings with 31 points, and Sabonis finished with 16 points and 10 assists, just one rebound short of a triple-double. Power forwards rarely lead their teams in assists, but Sabonis does with 7.3 per contest.

Both teams can fill it up. The Kings are the top scoring offense in the NBA averaging 120 points per game. Memphis is fifth scoring 117.6 per game. Both teams have .500 O/U records. Memphis is 22-22-2 and Sacramento is 22-22-1. More recently, the Over has been the trend for both the Grizzlies and the Kings. Six of Sacramento’s last eight games and seven of the Grizzlies’ last ten have gone Over the total.