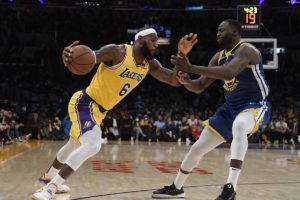 Golden State begins its quest for a repeat of last year’s NBA title when the Warriors host the Los Angeles Lakers tonight in the league’s opening night doubleheader. The Warriors concluded the regular season last year with the third-best record in the Western Conference. They ended up winning their fourth NBA championship in eight years thanks to a 16-6 playoff run that was ignited by seasoned players like Stephen Curry, Klay Thompson, Draymond Green, and Andre Iguodala.

Curry was voted the NBA Finals and Western Conference Finals Most Valuable Player after finishing a season in which he surpassed Ray Allen for the all-time lead in career three-pointers. The Lakers will open the season the same way they did a year ago – facing the Warriors. Last season’s first game was played in Los Angeles, and Golden State’s 121-114 triumph launched an 18-2 run to begin the season.

The Warriors won three out of four games against the Lakers last season, including a two-game home sweep when Klay Thompson returned from a two-and-a-half season absence due to knee and Achilles problems. Both of those wins over the Lakers at home featured 33 points from Los Angeles native Thompson.

Including all five of the players who started the team’s title-clinching victory at Boston in June, the majority of Golden State’s championship roster is back. Otto Porter Jr., the team’s second-leading rebounder, and Gary Payton II, the Warriors’ steals leader both left in free agency. They were Golden State’s biggest losses in the offseason. The two roster spots have been filled by Donte DiVincenzo and JaMychal Green, who joined the Warriors as free agents.

After punching Jordan Poole during a preseason workout, Draymond Green took a leave of absence from Golden State. Poole and Andrew Wiggins each received four-year contract extensions. Green has also requested an extension on a deal that he has the option of ending after this year. The Warriors’ general manager, Bob Myers, conveyed the idea last week that he would respond to Green’s request after the season.

Without a question, the Lakers’ costly talent wasn’t worth what they paid for it last season. Along with Golden State and eight other teams, Los Angeles was above the NBA’s luxury-tax threshold last season and was therefore required to pay the tax despite missing the Western Conference playoffs with a 33-49 record.

Due to injury, LeBron James and Anthony Davis missed a total of 68 games, and the Lakers had trouble getting Russell Westbrook together with his star teammates. These elements played a big role in the team’s decline from a 42-30 squad the previous year. Head coach Frank Vogel was fired and Darvin Ham, a former assistant coach for the Milwaukee Bucks, takes over as head coach in 2022-23.

With 17 NBA titles combined, the Lakers and Celtics are tied for the most NBA history. With seven championships, the Warriors are the third-winningest NBA team. Only three of Los Angeles’ final 20 road games last season were wins. In addition, in the Lakers’ last 18 trips to Golden State, they are 4-14 SU. In their last 14 home games, the Warriors have a 13-1 SU record.