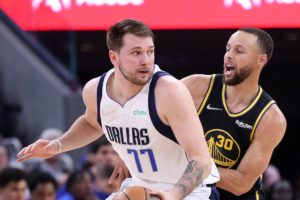 Golden State and Dallas met last year in the Western Conference finals. Tonight, they face each other for the first time this season. The Warriors could provide the Mavericks with the motivation they need to snap a four-game losing streak.

After the Warriors took advantage of a cold-shooting Dallas team to clinch a spot in the 2022 NBA Finals with a 4-1 victory, the Mavericks weren’t certain the superior team had won. Golden State outperformed the Mavericks in field goal percentage, 51.8% to 43.7%, which helped the Warriors overcome nine more turnovers and 14 fewer free throw points throughout the course of the series.

The Mavericks made the biggest move since their last meeting in June, replacing reliable guard Jalen Brunson—who was lost to the New York Knicks in free agency—with talented big man Christian Wood, who came over from Houston.

Wood is second on the team in both scoring (17.1 ppg) and rebounds (7.6 rpg), and he also shoots 56.6 percent from the field and 43.9 percent from three-point range. Wood scored 21 points in the 124-115 loss at Milwaukee on Sunday. Four nights earlier in a loss at Boston to open the Mavericks’ three-game road trip, he recorded a double-double with 26 points and 12 rebounds.

The Warriors are 11-10 so far this season with a number of losses to poorer teams in the NBA like Houston. They also lost to Denver which was playing without Nikola Jokic, Jamal Murray, and Aaron Gordon. Those are games the Warriors need to win.

Tonight’s matchup will feature two of the top stars in the NBA. Luka Doncic of the Mavericks (33.1 ppg) and Stephen Curry (31.4 ppg) of the Warriors square off in the nationally televised matchup as the top two scorers in the league.

In the postseason series from the previous year, Doncic outscored Curry by an average of 32.0–23.8 points, but Curry was far more effective, shooting 44.4 percent from three-point range overall and 41.5 percent overall. Doncic shot 43.9 percent and 34.0 percent, respectively.

In the meantime, Andrew Wiggins has contributed with 22.7 points and 12 threes while Klay Thompson has heated up with a 19.7 scoring average and 14 threes throughout the three-game stretch. In the three games, Thompson has made 52% of his three-point attempts while Wiggins has made 55%. Donte DiVincenzo entered the game on Sunday, a 137-114 rout of Minnesota, by making a season-high four three-pointers. Draymond Green added 19 points and 11 rebounds against the T-Wolves. The win over Minnesota was just the second road victory for Golden State this season.