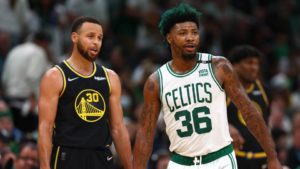 It could all end tonight. The Golden State Warriors can win their fourth NBA title in eight years with a win in Boston tonight. The Celtics lost back-to-back games for the first time this postseason when they lost Game 4 at home and Game 5 at Golden State on Monday night. Boston has not lost consecutive home games during this postseason and they would like to keep it that way and force a deciding Game 7.

One of the keys for the Celtics continues to be turnovers. In their Game 5 loss, Boston committed 18 turnovers continuing a streak this postseason. In playoff games when they have turned the ball over 15 or more times, Boston has lost seven of eight games. Golden State, by the way, had just six turnovers in Game 5.

It is evident that when the Celtics control the ball they have more success. They get off more shots and they tend to shoot better. In Game 5 when they turned the ball over a lot, Boston got off 13 fewer shots than Golden State. The Celtics also shot a series-worst 37 percent from three-point range. In the three games, they have lost this series, Boston shot 39.6 percent from the field. In the two games they won, the Celtics shot 49.5 percent.

Boston has continued to play great defense throughout the series. The Warriors averaged over 111 points a game during the regular season and were averaging 118 per game during the playoffs prior to the finals. The Celtics have held Golden State to just 105 points per game so far. The problem for Boston is that the Warriors have played even better defense at times. In their three series wins, Golden State held the Celtics to fewer than 100 points. In those three games, Boston averaged 93 points. In their two wins, Boston has scored 116 or more. It seems like a pretty easy recipe for the Celtics – don’t turn the ball over and shoot well, especially from the perimeter.