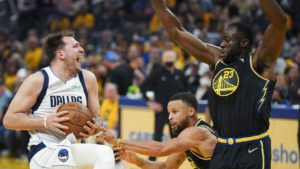 Defense was the key to Golden State’s Game 1 win over Dallas. The Warriors put forth one of the defensive efforts against Luka Doncic this season. Andrew Wiggins was tasked with defending the Mavs star and he turned in an outstanding performance holding Doncic to just 20 points. That was well below Doncic’s playoff average of 31.5 points per game. Golden State’s defense was critical in its 112-87 victory on Wednesday. Now, can the Warriors do it again?

In Game 1 of their previous two series against Utah and Phoenix, Dallas lost both games. Against Phoenix, the Mavs gave up over 120 points and went on to do the same in Game 2. Against the Jazz, Dallas rebounded from its opening game loss and beat Utah. If Dallas is going to have any sort of chance tonight, the key is breaking the Warriors’ defense.

Prior to Game 1, Dallas was playing very well on the offensive end. They had an offensive rating of 112.7, which was seventh out of all the teams in the postseason. The Mavs were shooting 45 percent from the floor and 37 percent from behind the arc. They did neither in Game 1. Other than Spencer Dinwiddie (5-of-11, 17 pts), no other player in the Dallas rotation shot over 37.5 percent on Wednesday. That has to change.

For the Warriors, it was a performance reminiscent of days past. Stephen Curry, Draymond Green, and Klay Thompson all put forth great performances, but the Warriors are much more than just their core. Jordan Poole is averaging 19.3 points a game during the playoffs. Wiggins has been an elite defender and is averaging 15 points while shooting 49 percent from the floor. The bench is strong with guys like Otto Porter Jr. providing quality minutes. Golden State is a top-five team in offensive rating and they lead all playoff teams with a 114 points per game average.

With the Game 1 win, Golden State has now won 14 of its last 17 games. The Warriors have owned the court at the Chase Center going 9-0 SU in their last nine home games. Where Golden State has struggled is against the number. They did cover in Game 1, but they are just 3-6 ATS in their last nine games. They have not fared well against Dallas in that department either. The Warriors have covered just four times in the last 15 games against the Mavericks. In the last eight games against Dallas at home, Golden State has covered just twice. Game 1 was one of those.

Don’t forget that Dallas has beaten Golden State in nine of the last 12 meetings. As mentioned, they own an 11-4 ATS record against the Warriors in the last 15 games. Both teams are trending Under, which is no surprise during the playoffs. The Under is now 48-26 so far this postseason. Game 1 went Under the total, but the last ten Mavs-Warriors games have averaged 228.8 points. The last three have averaged 214, which is tonight’s total.