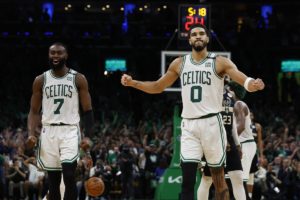 It is a crucial Game 5 in the Eastern Conference finals tonight. The series moves back to Miami where the Heat are actually the underdog. Both teams are banged up, but Miami might be worse. Jimmy Butler was clearly not himself in Game 4 after missing the second half of Game 3 with a knee injury. Tyler Herro sat out Game 4 and he’s questionable tonight with a groin injury. P.J. Tucker, Kyle Lowry, Max Strus, and Gabe Vincent are all listed on the Heat’s injury report. All are expected to play, but if Miami isn’t on top of its game tonight they could be in serious trouble

That trouble is in relation to this. In NBA playoff series that are tied 2-2, the winner of Game 5 usually goes on to win the series. The number is big too. In situations like this, the Game 5 winner goes on to take the series 82 percent of the time. That is why tonight’s game is critical for both teams.

Boston has its own share of injuries too. NBA Defensive Player of the Year Marcus Smart didn’t play in Game 4, but he is expected back tonight. Robert Williams is questionable with a knee injury and Derrick White is listed as probable with a hamstring issue. All three are expected to play

That’s good news for Boston, which has actually dominated this series. There have been 16 quarters played in the series thus far. Of those 16, Boston has won all but three. One of those came in the fourth quarter of Game 4’s blowout win over the Heat. The other two are the reason why this series is tied at 2-2.

In looking at the statistics for the last three games, Boston leads Miami in almost every major offensive and defensive statistical category. There is one statistic that does stand out and it is one of the big reasons why this series remains tied. If the Celtics are going to have any chance at winning Game 5, they are going to have to limit their turnovers.

In the 12 playoff games this season where Boston committed 15 or fewer turnovers, the Celtics won 10 times. There were three playoff games where the Celtics committed 16 or more turnovers. Not surprisingly, all three of those games were losses. Two of them have come in this series against Miami.

Game 4 was the first time in this series that a team failed to score 100 points. As a result, the total went Under for the first time in this series. Tonight’s total has adjusted downward and sits at 203.5. The four games in the series so far have averaged 212.5. Typically in the NBA playoffs, the Under is the trend and this season is no different. However, in five of the last seven games between the Celtics and the Heat in Miami, the total has gone Over.