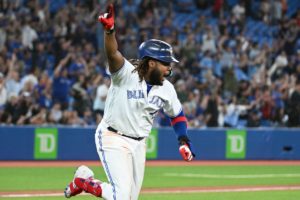 As they prepare for the fourth and final game of a four-game series on Wednesday, the Toronto Blue Jays and the Baltimore Orioles definitely have each other’s attention. The two teams are competing for an AL wild card. That competition showed last night as both teams emptied the benches for an on-field altercation last night.

After getting swept in a doubleheader on Monday, the Orioles (72-64) won 9-6 last night to give themselves a chance at a series tie. The Blue Jays (75-60) ended their five-game winning streak, but they are still in a strong position to make the postseason. In the race for the third and final AL wild card, Toronto leads Baltimore by 3.5 games.

With the Orioles ahead 6-5 last night, Baltimore reliever Bryan Baker struck out Matt Chapman. He then appeared to gesture toward the Toronto bench. Baker made his major league debut last year as a Blue Jay. Whatever happened, the two teams will continue to fight and scratch for every win they can get. The MLB season has less than 30 games remaining.

Baltimore will start right-hander Dean Kremer (6-4, 3.22 ERA) tonight. He has four straight quality starts and is 2-0 with a 2.04 ERA in those four games. In 26 total innings over those four starts, Kremer has struck out 19 batters and issued just four walks. In his most recent start, Kremer allowed five hits and two runs in a win over Oakland last Friday. In four appearances versus the Blue Jays in his career, Kremer is 1-0 with a 7.79 ERA. On August 16, at Toronto, he pitched seven innings of two-run ball to earn the win.

The Blue Jays will counter with Alek Manoah. The right-hander is 13-7 with a 2.48 ERA this season. He started two games in a row against the Orioles in August, and the Blue Jays lost both of those games. Manoah gave up seven runs on 12 hits over 10.2 innings pitched. The Blue Jays lost four of Manoah’s starts in a row – including the two to Baltimore – before he held Pittsburgh scoreless and Toronto won 4-0 in his last start.

Manoah pitched three games against Baltimore last season. Toronto won two of those starts. He has pitched against the Orioles six times in his career, going 2-1 with a 3.55 ERA.

All four of Manoah’s last four starts have finished with six runs or fewer. That includes the 4-0 victory over Pittsburgh and 4-2 losses to the Yankees and Orioles. Only one of Kremer’s last six starts has gone Over tonight’s total of 7.5. Each of those six starts ended up going Under the total. Baltimore has an O/U record of 61-70-5 this season. What’s interesting is that in the last ten games played between these two teams, the average combined run total is 10.7. All three games in this series have gone Over the total.