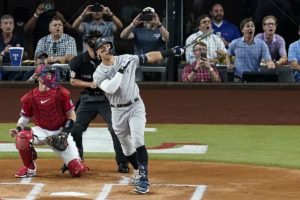 The American League Division Series begins tonight at Yankee Stadium when the Yankees host the Cleveland Guardians in Game 1. The Yankees, who led all teams in the majors with 254 home runs, including 62 by slugger Aaron Judge, won the American League East Division title. Cleveland had to find other ways to win. The Guardians hit 127 home runs this season, which ranked 29th out of 30 MLB teams while winning the AL Central.

After a great start that saw them reach 64-28 at the All-Star break, the Yankees fell off for roughly six weeks before regaining their momentum in the final stretch. They finished 20-9, with Judge hitting 11 home runs in his final 30 games while batting.380 (38-for-100). Judge is playing in his final postseason before becoming a free agent. He has played in 35 playoff games so far, hitting.230 (31-for-135) with 11 home runs and 22 RBIs.

Cleveland beat Tampa Bay in the wild-card round, scoring three runs in 24 innings, all on home runs, to advance to its sixth postseason meeting with the Yankees. On Saturday, Cleveland won 1-0 in 15 innings thanks to a home run by Oscar Gonzalez after Jose Ramirez’s two-run blast in Game 1 on Friday.

The Guardians have won 26 of their last 32 games overall. The Guardians were 11 games ahead of the Chicago White Sox when they won the division despite being four games over.500 until September 4. Cleveland’s 3.46 team ERA ranked sixth in the majors despite the team not hitting many long balls. The Guardians are aiming to continue the momentum when Cal Quantrill makes his first postseason start after getting great starts from Shane Bieber and Triston McKenzie versus Tampa Bay.

In his final 17 starts of the regular season, Quantrill went 11-0 with a 2.95 ERA. That gave the Guardians ace a season record of 15-5 with a 3.38 ERA. In four appearances against the Yankees in his career, Quantrill is 0–1 with a 3.38 ERA. His one game against them this season came back on April 23 in New York. He went 6.1 innings and gave up three runs on six hits.

Gerrit Cole will start tonight for the Yankees. He is aiming for a better postseason than the one he had last year. In the wild-card game against Boston, he gave up three runs on four hits in two-plus innings. Cole is starting his first postseason game for the Yankees in New York because of the pandemic season. Cole went 2-0 with a 2.95 ERA in three postseason appearances at neutral venues in 2020.