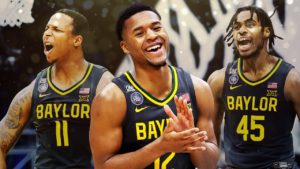 Scott Drew and his Baylor Bears won their first NCAA men’s college basketball national championship a year ago with a win over favorite and previously unbeaten Gonzaga. Can the Bears do it again?

Early on, the prevailing thought was no. The Bears had simply lost too much from last year’s championship team. However, as the new season heads into conference play after Jan. 1, the No. 1-ranked team in the country is…you guessed it…Baylor.

There’s still a lot of basketball to be played, but can Baylor repeat as national champions?

If you truly believe the Bears are capable of winning back-to-back national championships, now is the time to get in on the action. Despite being 11-0 and ranked No. 1 in the country, the Bears are not among the betting favorites to win this year’s March Madness. Bettors can get Baylor at +1200 to win it all right now. And, it very well could happen.

Two more Bears average 9.0 or more points. Matthew Mayer scores 9.2 and 6-8 F Jonathan Tchamwa Tchatchoua averages 9.0 and a team-high 8.4 rebounds. Eight players play at least 17 minutes per game and Drew gets the most out of each and every one.

The defense is once again outstanding. Baylor ranks eighth in the nation in points allowed per game giving up just 56.8. In one of their more dominant wins of the 2021-22 season, the Bears held No. 9 Villanova to 36 points in a 57-36 victory. That kind of defense can win a championship.

One of the biggest things working against the Bears and their efforts to repeat as national champions is simply history. There has been no back-to-back champion in college basketball since Florida in 2006 and 2007. Prior to the Gators, you have to go back to 1991 and 1992 when Duke won consecutive national championships. Back-to-back championships are just something that doesn’t happen often in college basketball.

An issue the Bears might have is matching up with bigger teams. Drew prefers to play small-ball with four and five guards on the floor. Matthew Mayer, listed as a guard is 6-foot-9. Tchamwa Tchatchoua is the Bears’ biggest inside presence both on the offensive and defensive ends. Jeremy Sochan (6-9) plays 22 minutes a game, but collectively the Bears are not a big team. That could give them trouble at times this season.

Baylor will once again play through a tough Big 12 schedule. Five teams, including the Bears, are ranked this season. Kansas is No. 6. Iowa State is currently eighth. No. 17 Texas is the best defensive team in the country holding opponents under 52 points per game. The Big 12 schedule could take its toll on Baylor.

Let’s not forget UNLV. In 1990, Jerry Tarkanian led the Runnin’ Rebels to a national title with a 30-point win over Duke. The following year, Tarkanian’s squad started the season 11-0. Baylor has done the same this season winning their first 11 games all by at least eight points. In 1991, UNLV did make it back to the Final Four but lost to eventual champion Duke, which ironically went on to win the next two national titles.